THE NETHERLANDS EMBASSY IN ATHENS by GFRA ARCHITECTS

Starting point of the renovation of the Dutch Embassy in Athens was the introduction of the most current philosophy of public office collaborative work environment in the Netherlands, called ‘Het Nieuwe Werken’. This HNW is based upon three pillars, named behaviour, bricks and bytes. Within behaviour there is a shift towards greater individual responsibility though flexible work times and places, where result is evaluated and not just office hours. Bricks refers to the flexible office space that accommodates this collaborative workspace, where workplaces are not based on position in the hierarchy but on the specific activity performed. Finally bytes involves the technology to support this, modern computer, telephone and network systems allow for activities to be done any time, any place. 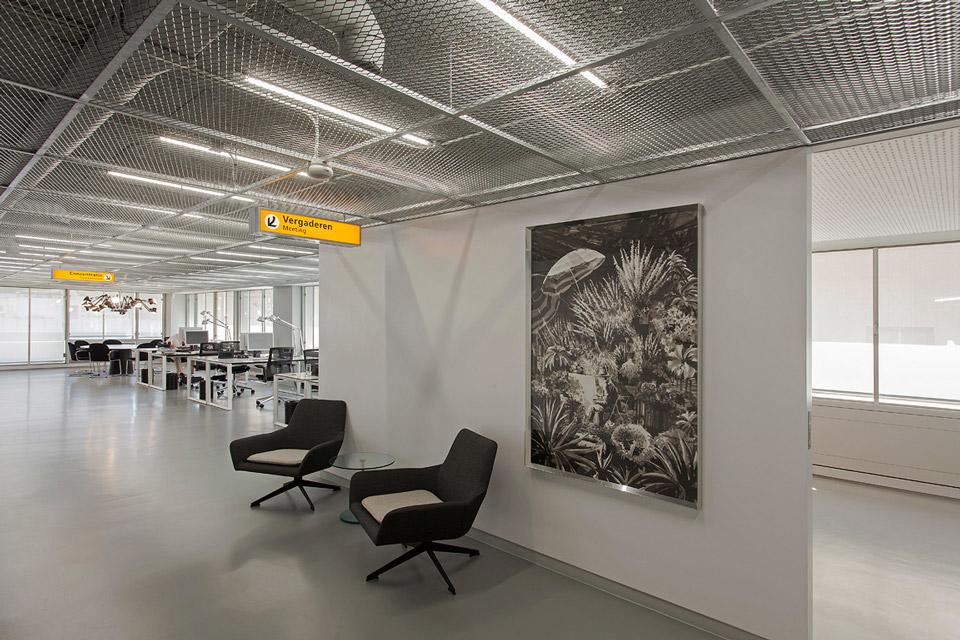 The Dutch Embassy in Athens was chosen as a pilot project as it is one of the first embassies that applies this new work environment. The existing embassy occupies the complete fourth floor of an office building with several other embassies across the Panathenaic Stadium. In reaction to the previous interior that dated from the 90’s with many closed office spaces, there was, apart from the necessities of HNW, a strong urge of the embassy itself to open up the space towards the remarkable view over the stadium. 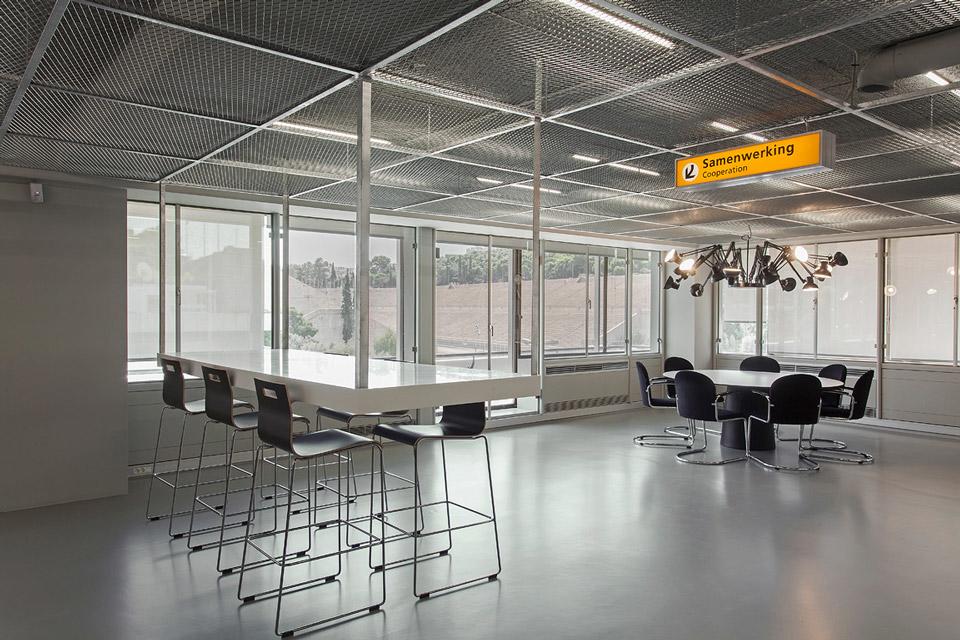 Basically the embassy was transformed into an open office space where flexible and alternative workspaces are provided for the embassy staff. Even the ambassador for example has no longer his own office, but works according to his activity at one of the provided workplaces.In this open space typical office desks are provided for longer time work activities, and several alternative work and sitting places for shorter use, such as a meeting table, a couch with poufs, a hanging counter with bar stools and a set of small high couches for private conversation. 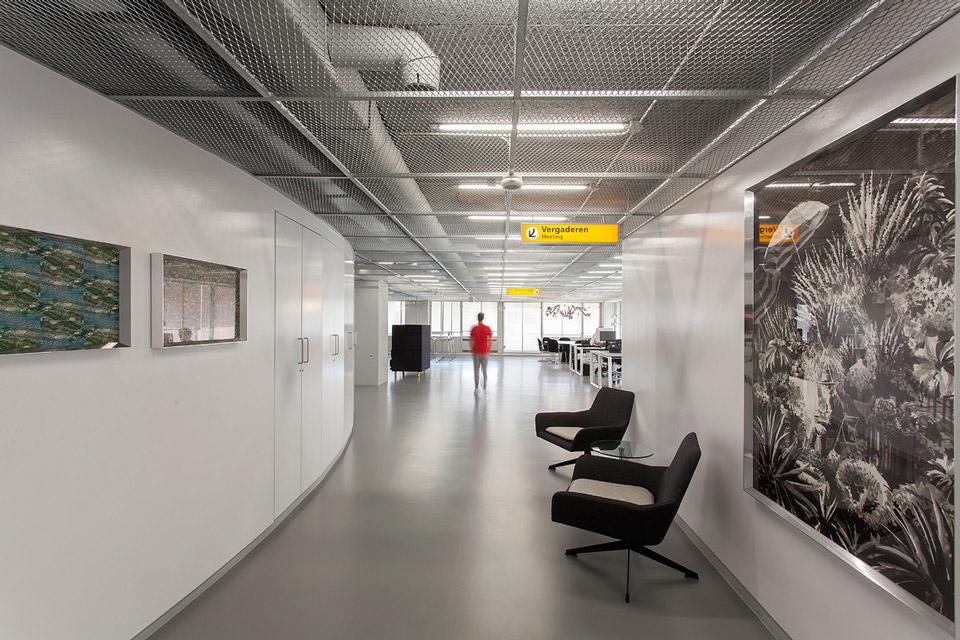 In addition to this several closed spaces create the necessary environment for private or quiet activities, such as a large meeting room, a small meeting room, a reception space to accommodate guests and two small workspaces for concentrated work activities. 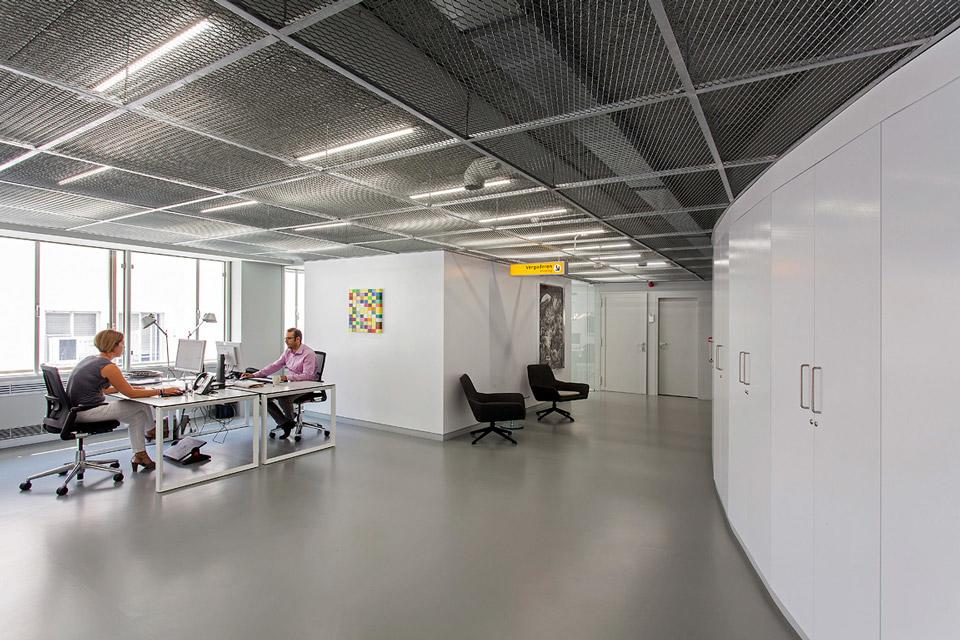 Though the renovation did not involve the complete embassy and many elements of the previous interior were maintained, it was considered essential to create a high level of design with a strong character and identity. The embassy staff members no longer have their own personal space, therefore it is important to make people feel at home and to define their work environment. Secondly the embassy was required to express a Dutch identity, which was mainly focused on character elements such as clarity and openness through transparency. The overall space was given a clear, clean technological look, using white and grey. Colour and character were introduced through the careful choice of signage, furniture and art. 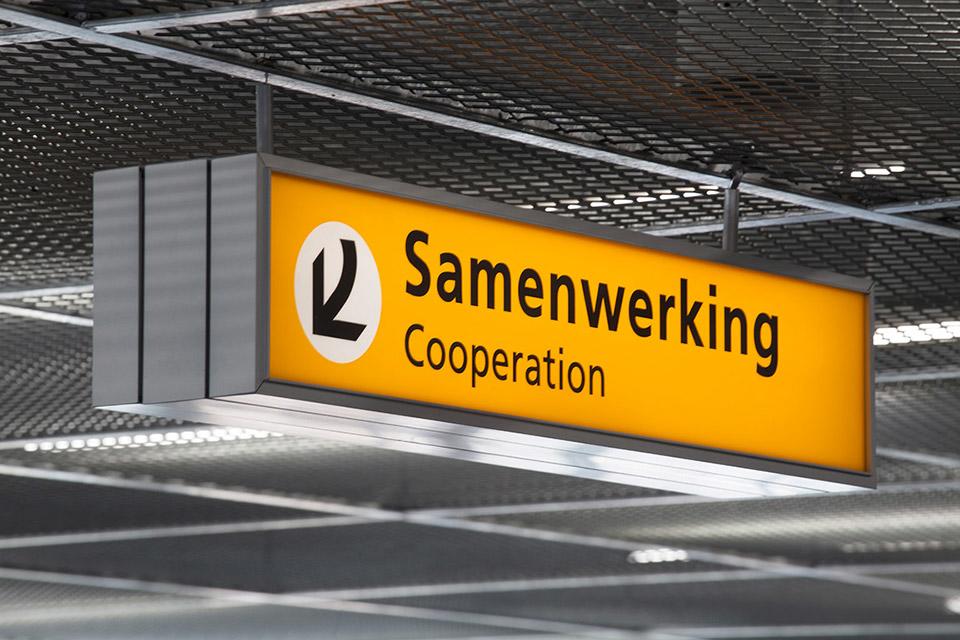 Fitting with the technological cleanness of the space, specific reference is made to the Amsterdam airport of Schiphol with the use of authentic airport wayfinding signs. In cooperation with Schiphol airport these were designed and manufactured by the firms that provide the airport. In the embassy the signs specify the activity of each area and gives a recognizable identity both for Dutch people and foreigners. 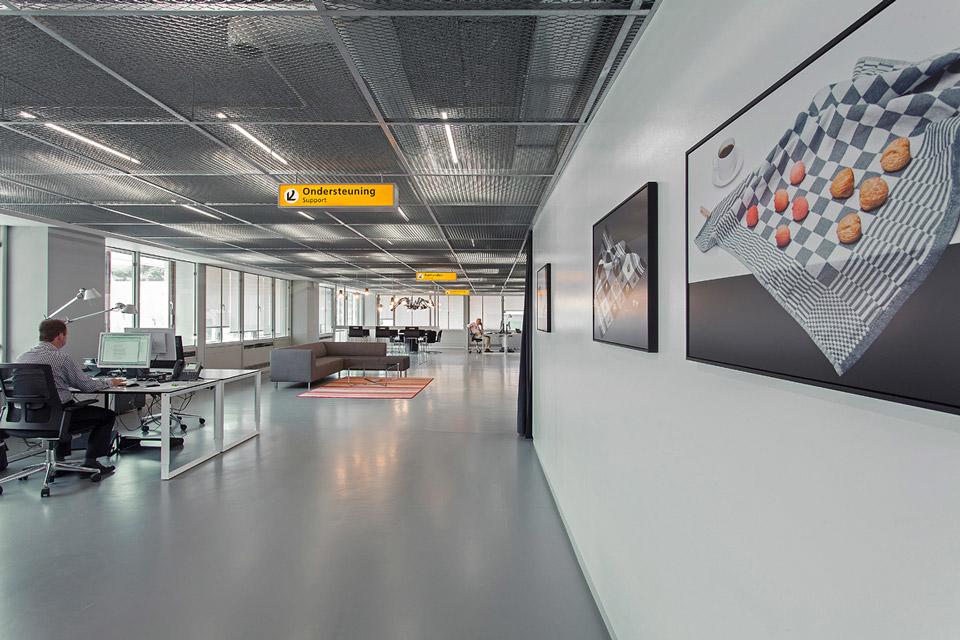 Furniture accommodates the collaborative functions and together with pendant lighting elements are again references to the Netherlands, by choosing mainly Dutch design products. Art also plays an important role in the character of the space, by using modern references to classic Dutch art and culture. 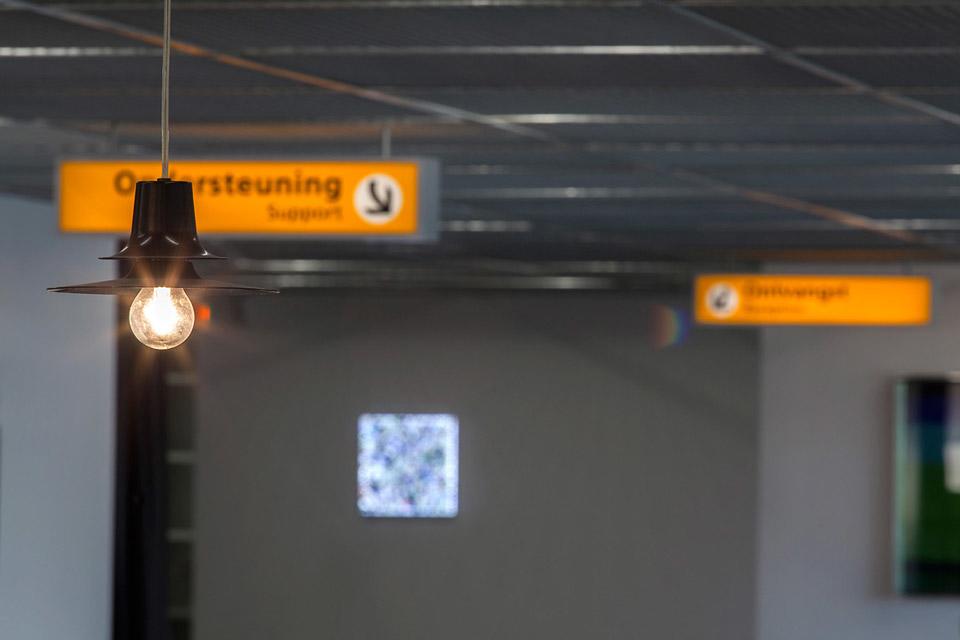 In the open space itself main elements are the floor and ceiling. Due to the fact that in an open work environment the acoustic quality has to be of the highest level, for the floor was chosen a rubber finish, that reduces the sound of footsteps, but has a clean and natural feeling. Because of the low height of the space, a choice was made for the highest amount of transparency of the false ceiling. Custom metal mesh elements of galvanized steel create a single ceiling level that hides the elements above, which are beams, sound absorbing panels, air and electricity ducts, all painted in the same colour to visually disappear. The main lighting elements are positioned above the ceiling as well, which helps reduce the feeling of low height and creates one united shiny ceiling surface. 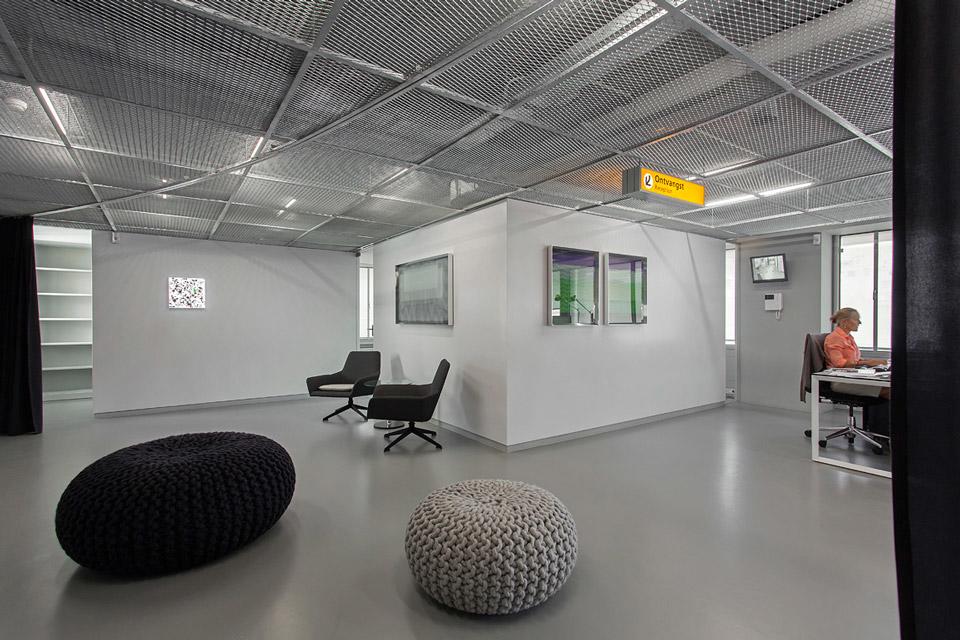 The few closed elements in the space that incorporate the closed office spaces are painted with a white glossy finish in contrast with the mat grey of the neutral background of the space. Black curtains give additional sound absorption and the possibility to separate some areas for reasons of privacy or security as otherwise the transparency of the embassy allows the interior to be visible from the public area.

The office gfra architecture was founded in Athens, in 2004, by Tasos Gousis, Joost Frijda and Eddie Roberts. Their work for the renovation of the Dutch embassy in Athens has been selected to be showcased at the 8th Young Architects Biennial to take place in Athens in September, proudly supported by SIAS SA.