A set of information in search of an Idea *

Watching The Architect and the Painter, a new documentary film about the work and lives of famous American mid-century designers Charles and Ray Eames, by Jason Cohn and Bill Jersey, one looks at the groundbreaking creative process behind their best known for plywood, fiberglass and wire frame seating and furniture designs for Herman Miller, their acclaimed architecture study for Case Study House #08. As the film goes on however, one  gets acquainted to less understood, only as much – if not more – fascinating aspects of their enterprise.

On this occasion, we will take a closer look on Information Machine, a project developed by the Eameses for IBM in 1964 and Powers of Ten, a film adaptation of the 1957 book Cosmic View by Kees Boeke, released in 1977. Both projects, exemplify their unique ability of conceptualizing ideas and communicating them in a perceptive yet palyful and outreaching manner.

Charles being an architect and Ray an artist, their forward-thinking synergy, not only resulted in what is called the’ Eames Look’, a sleek and functional style for everyday-accessible to everyone objects but in many ways influenced information presentation creative practices and laid the ground for the growth of computer age. The varied and multi-leveled contributions of Eameses as ‘communicators’ can also be understood through the ways they used film, as a means to explore and explain ideas and concepts. The films they produced were often self-initiated – to further explore things that inspired and fuelled their projects – but also commissioned by major corporations such as IBM, for whom they designed a series of exhibitions centered on scientific and mathematical themes. 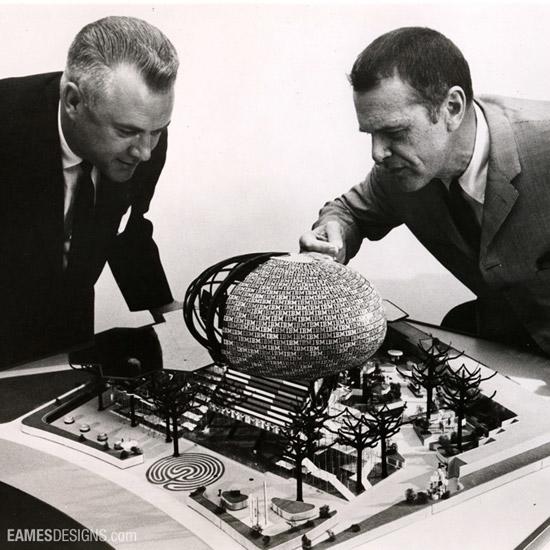 At the time, computers were a new culture introduced to the wide public, often confronted with skepticism. IBM pursued a visual language to address the public, raise awareness on the potentials and beneficial contribution of these new machines in many aspects of everyday life. This need was paired with Charles Eames’s enthusiasm for communication theories and his vision of incorporating computers within the architectural and planning processes as was early expressed on the film Communication Primer (1957, 21.30 min). On the occasion of 1964 World Fair in New York, the Eames Office were assigned to design the IBM pavilion. The proposal to be realized was Information Machine, an egg-shaped theater, standing on top of a 90-feet tall steel-trees grove. 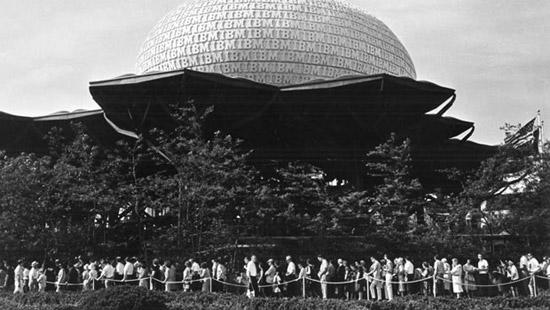 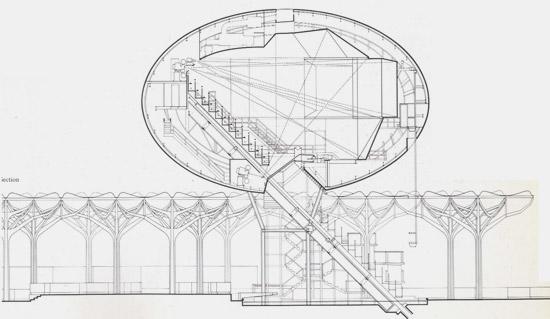 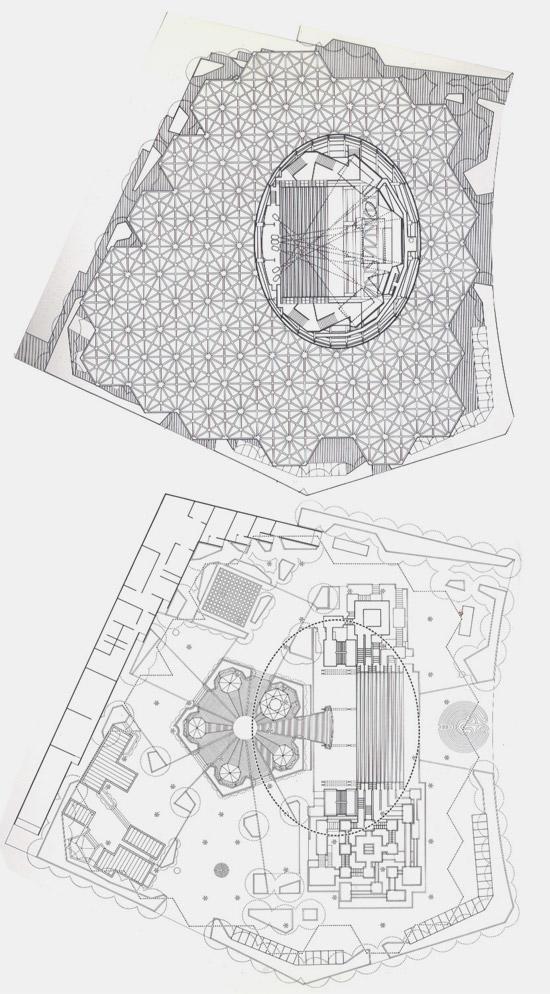 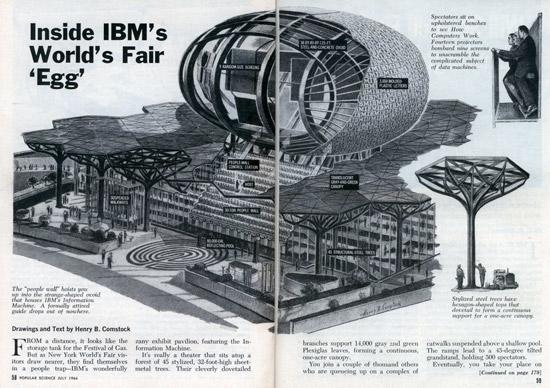 The most intriguing thing perhaps about this impressive steel structure, developed in cooperation with Eero Saarinen, is the way it staged the informative and educative contents of the pavilion (also designed by the Eames office), the way the visitors encounter with a range of multimedia presentations, puppet-show theaters, display bars providing hands-on interaction with computers and more, was choreographed within this space.

Visitors of the pavilion queued underneath the steel-trees grove, waiting for their turn to watch the show running inside the Information Machine. A 500-seat hydraulic ram pushed grandstand – the People Wall – descended from the elevated ellipsoid structure and the audience filled the tiers. Carried upwards, into the theatre, they were about to watch Think. Think (1964, 11min) was a synchronized narrated film presentation, employing a set of 22 screens of varying shapes and sizes and 35mm projectors, elaborating the similarities between information processing and decision making between computers and humans. 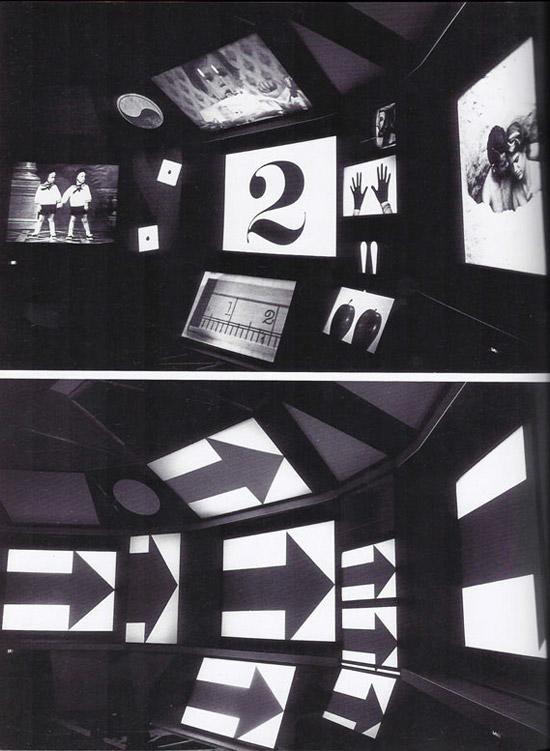 The chronicle of the architecture and exhibitions of the pavilion, with striking footage from the show inside the Information Machine, were later edited into one film, IBM At The Fair (1965, 8 mins).

One of the last – and perhaps the best known film of the Eameses, is Powers of Ten (1977, 10 min), a film produced for educative purposes, presenting the idea of orders of magnitude and subtitled: A Film Dealing With the Relative Size of Things in the Universe and the Effect of Adding Another Zero. The cyclical narrative device of the film (it can be played backwards and forward with the same effect and infact teachers were instructed to do so in classrooms), takes as on a zoom-out journey starting from a couple on a pic-nic blanket in a park. Every ten seconds the camera shot zooms-out ten times the distance it had covered in the previous ten seconds until it reaches as far as the known universe. It then returns to the picnicker’s hand in breathtaking velocity and proceeds to journey deep into the cell of the human body. Zooming-in with ten times more magnification every ten seconds, the shot finally lands on the micro-structure of a carbon atom. The film perfectly works like a map – a device of visualizing information – only in this map time is added to the equasion.

Powers of Ten, is not just a film about the study of mathemetical concepts, its very form is a reflection of them and that is one dominant characteristic in Charles and Ray Eames work. Their pursuit was never about the final product, it was about the process and research of ideas – and the final products were the vessels to carry and embody these ideas. The last statement of the film, right when we meet the carbon atom is “We are in the domain of universal modules. There are protons and neutrons in every nucleus, electrons in every atom, atoms bonded into every molecule out to the farthest galaxy.“.

As Michael Neault indicates in his essay The films of Charles & Ray Eames: “It’s one of the last statements Charles put on film, and it’s a comment — not about the difference of things, as one might think at the start of the film — but about the universal sameness of things. As such, you begin to understand Powers of Ten is much more than just a document representing orders of magnitude. And it all happens in 9 minutes.”

* “The classic movie staple is the chase, and Eames’ films present a new kind of chase, a chase through a set of information in search of an Idea.”, Paul Schrader, Poetry of Ideas, Film Quarterly, 1970.