Mill turned into vacation house in Pelion – by Tessera Architects

Olive-oil press means for a watermill and a watermill means for water. Naturally so, the abandoned mill was situated at a prime location in relation to its functional requirements – a wedge-shaped portion of land, gliding between two creeks, where they pooled their momentum and continued as a path towards the Aegean Sea . The sole access to the plot was through an old stone bridge weathered over the years by the impetuous waters of Pelion. 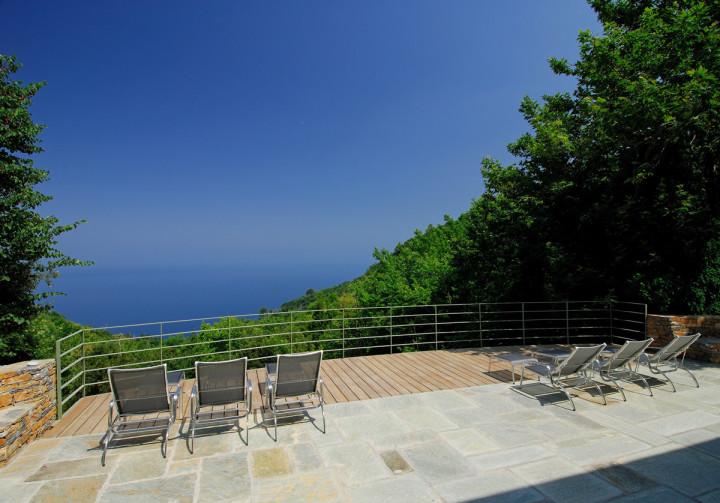 The remnants of the old mill, included the original stone shell in poor condition and the rickety wooden roof. The only trace left from the second floor were the gaps on the stone walls where the wooden supporting beams once nested. Οn the soil paved groundfloor lied the remnants of various machinery in marginal state existence: the millstones – the heart of the mill – the axle gears connecting them to the “winge” and through it to the driving forces of Pelion. There were also traces of the old fan,  the central hub and a rusty pair of spokes. 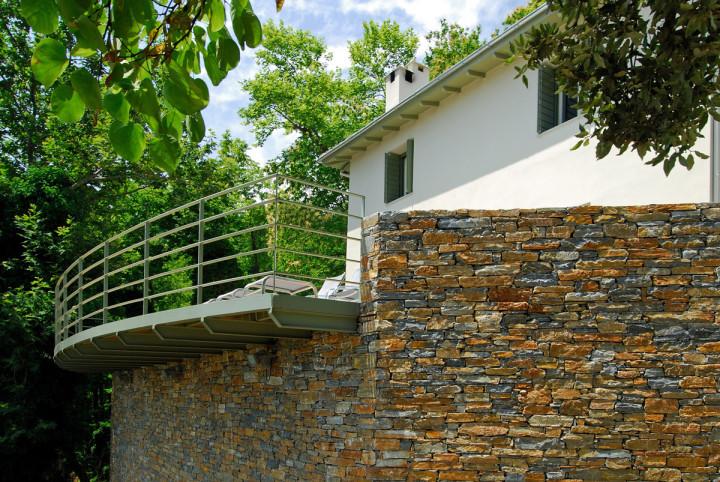 The original building was a two floor rectangular stone structure (15m x 10m) with a wooden hipped roof, built on a steep slope plot. The natural slope resulted in a single-floor western facade, while the other three progressively evolved into two floors. Corrosion deformed the wooden roof due to the weight of slate coating, making ​​the replacement mandatory. To maintain the original proportions and to avoid the presence of columns and beams inside the building , the exterior wall was strengthened to obtain bearing properties using shotcrete. 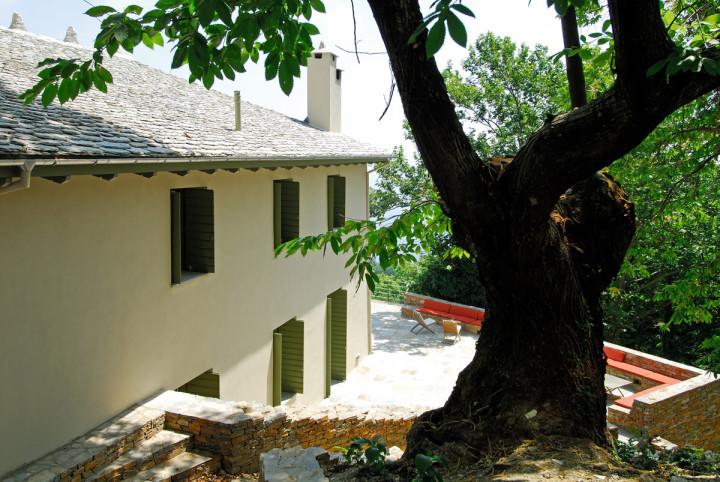 Additionally, for the top plate of the groundfloor, a metal structure comprising of the combination of joists (INP) and beams (HEB) was coined, to ensure the required bearing properties and rigidity (INP + HEB), as well as a visually sophisticated result. The utility spaces were placed on the ground floor, so as to be concealed by the natural inclination of the land. The desire of both the owners and the designers was not to attempt a sterile restoration of a mill that would serve as a residence, but to create a modern house, which subtly highlights traces of its past as a workshop space . The ground floor arrangement allows for an independent living space, with the living room oriented towards the view, the fireplace, the dining room and open kitchen. 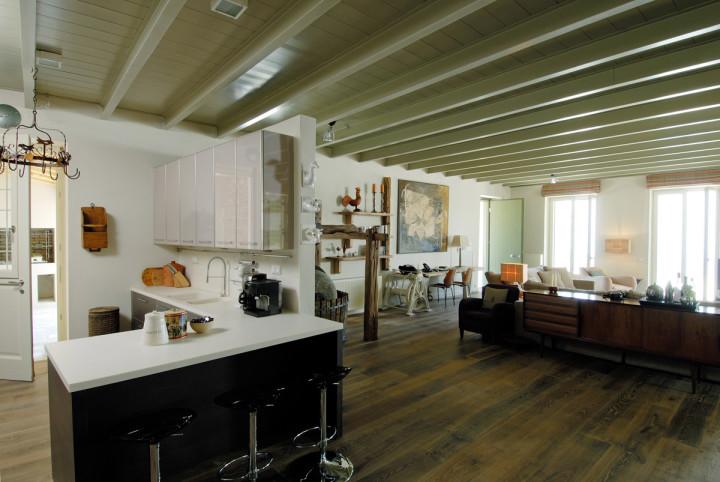 Dominant features of this space – that function as a reference to its earliest use – are the metal beams of the roof, the stair connecting the ground floor with the first floor comprised of metallic structural elements and wooden steps, as well as the meticulous restoration of the millstones. 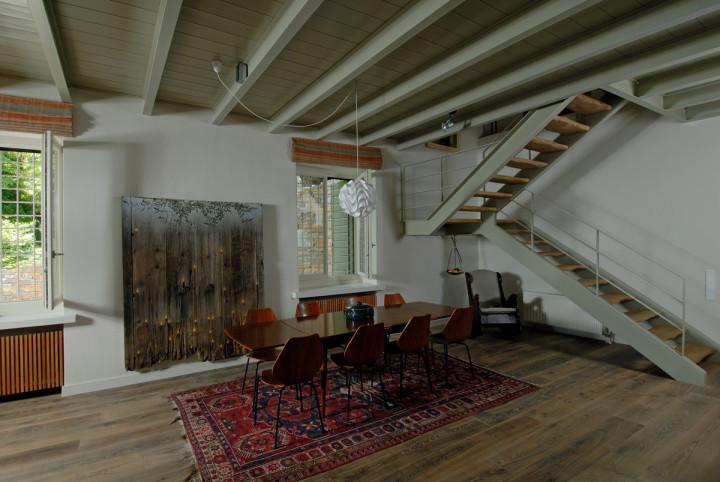 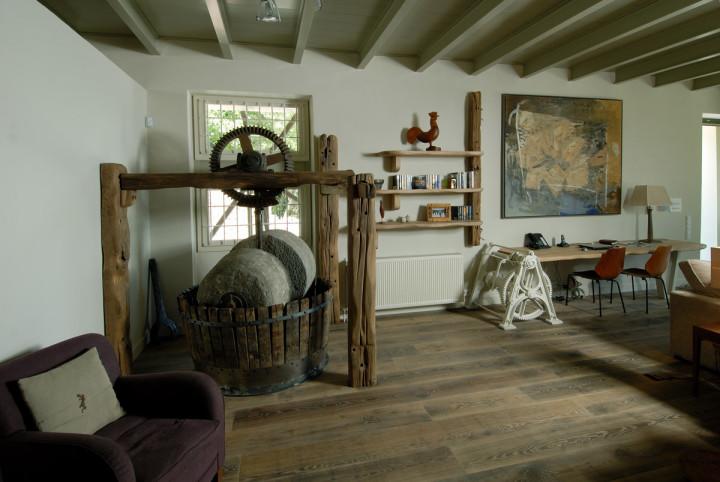 The originall openings of the mill were preserved, offering a panoramic view of the Aegean Sea through the dense vegetation of Pelion . 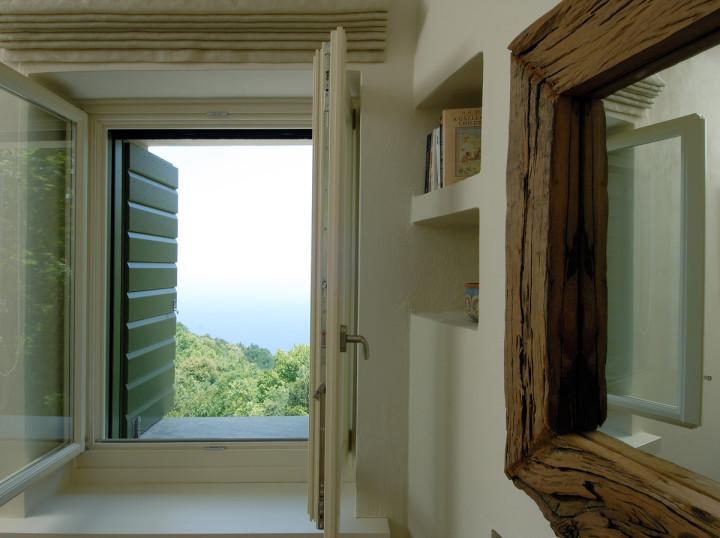 The second floor arrangement features four separate bedrooms, dictated both by the existing openings, the strict geometry of space and access to it. 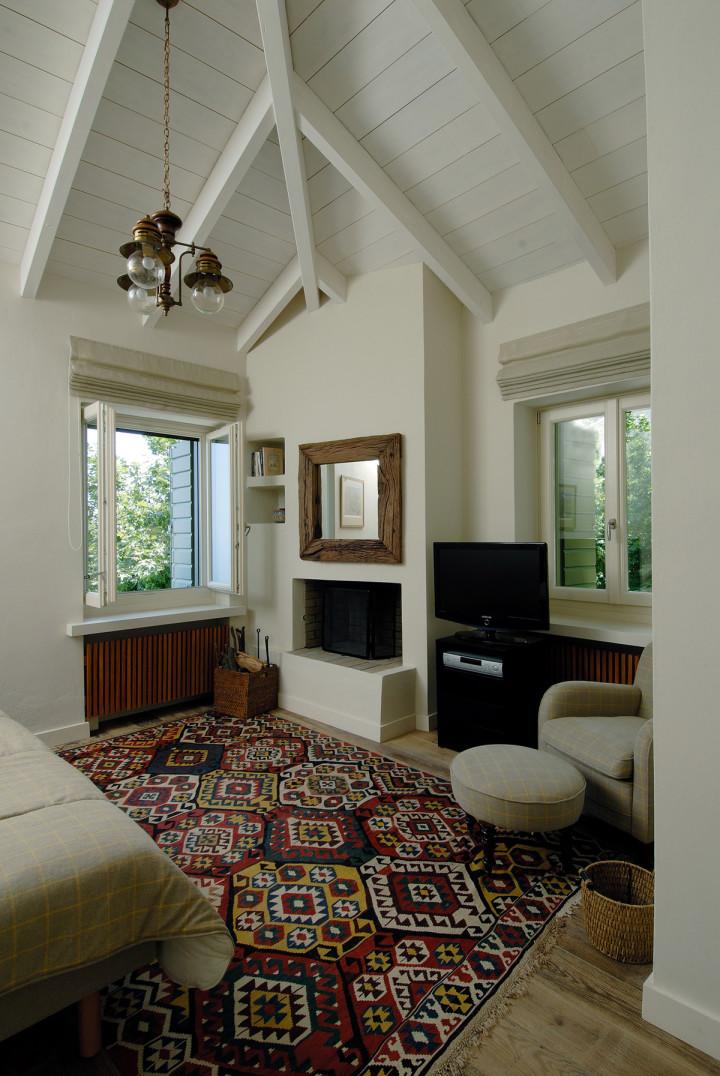 In the light of providing as good and easy access as possible within the inaccessible landscape, the old network of stone paths were reconstructed allowing for walks and strolls in the dense vegetation. Also the immediate area around the house was paved, providing for necessary space for gatherings. 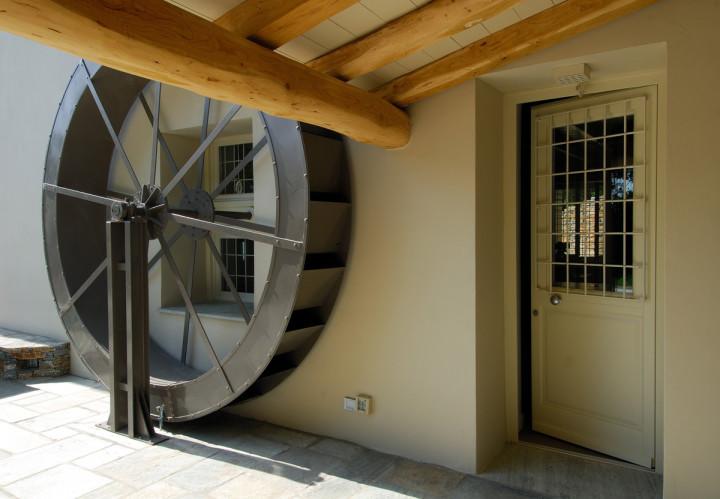 The Northern facade is dominated by the restored waterwheel, which organizes outdoor seating anb barbecue areas. Key element of this configuration is the cantilevered wooden deck extension towards the Aegean, intensifying the feeling of a suspended garden on top of the Pelion landscape . 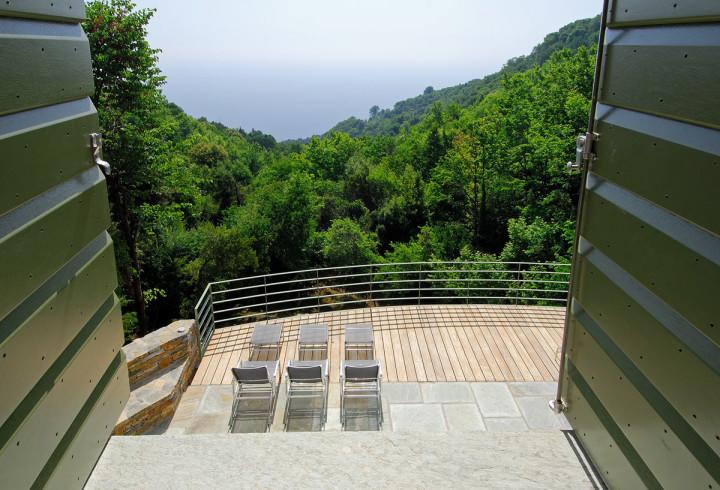