A highly esteemed jogging trail is running along the foot of Philopappus hill in Athens, next to Acropolis’ imposing rock. Arguably one of the holy-grails for runners worldwide, it connects five of the seven historical hills that define the locus of the classical city. From this path one can experience simultaneously both faces of contemporary Athenian urbanity: the calm and serene nature of its preserved archaeological sites in contrast with the urban mayhem that unfolds downtown. Almost adjacent to this trail lies a recently completed townhouse – designed and constructed by ISV Architects – which performs its own balancing act between its urban location and the suburban aspirations inspired by the surviving fragments of the Attic landscape. 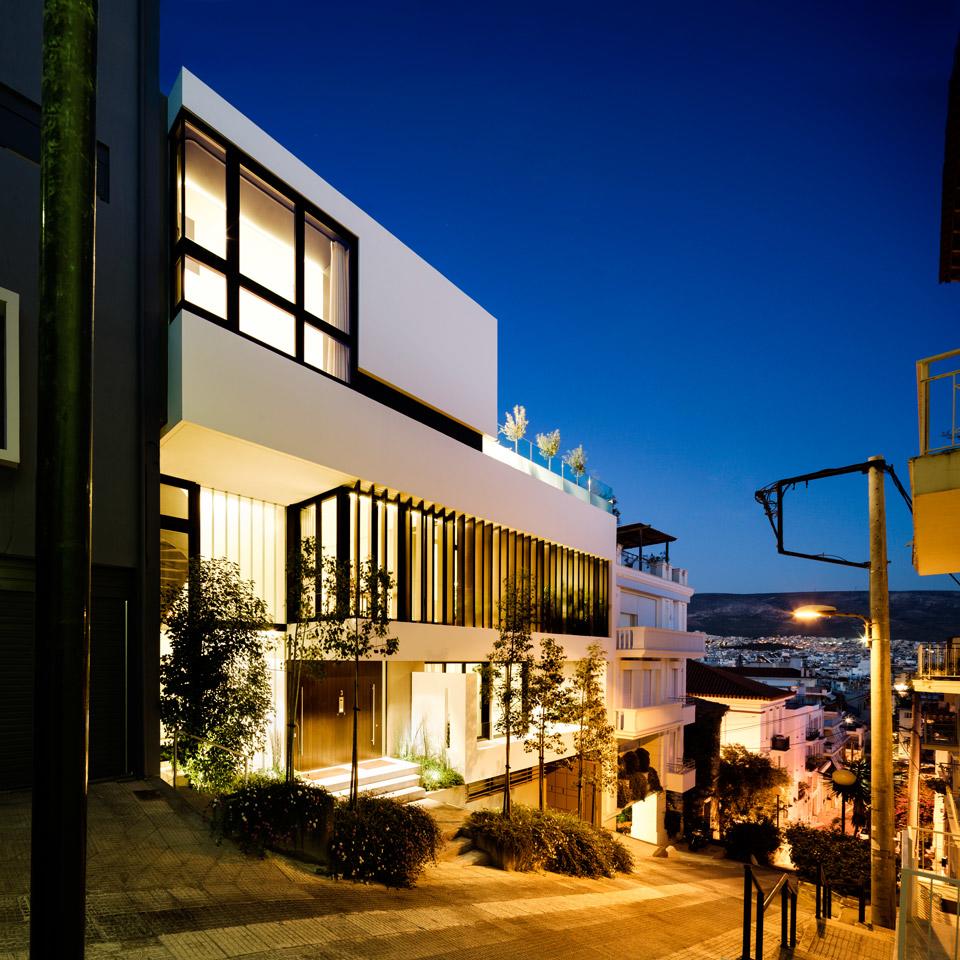 Consistent, restrained and confident: these three words describe accurately the owners and were set as the initial core values that had to be reflected on the residence’s architecture. The owners themselves are far from the average norm. A multinational couple in their late 30s, both active in the global financial business and with a very acute intuition on contemporary design, they chose Athens to be the place to settle down, ending a long period of dwelling in various western metropolises. After carefully selecting the plot – a relatively small but promising bit of dense urban fabric overlooking the Athenian basin with its fair share of Acropolis’ view – they asked for a house with a flexible layout, that can easily accommodate future spatial requirements without compromising its architectural qualities and aesthetics. They wanted a house solid yet informal, minimal yet cozy, making a clear design statement, but in the same time easily cherished with friends and family. And they demanded to participate in the design process. 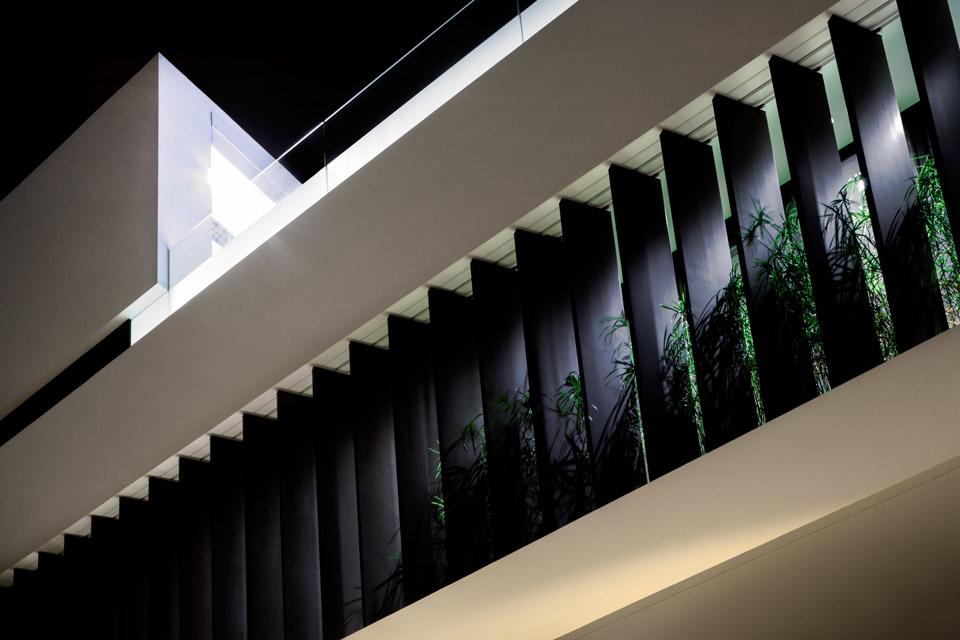 The house takes advantage of the plot’s merits, stitching an almost 210o panoramic view of the Athenian basin that spans from Mt. Penteli to the island of Aegina. The potential for outstanding views called for an upside-down layout of the building – playfully nicknaming it as the “House On Top” project. All areas that did not programmatically call for extended outside views formed a pedestal on top of which is found the living room block, reaching the maximum permitted height and being accessed via the stairs (an intentionally understated elevator is also available). A project within the project, the residence’s staircase is conceived as the main theme of the house’s spatial structure. With a triple storey high internal space, featuring an exposed concrete side wall and a dramatic, rounded, black matte metal staircase almost hovering in the void, it ensures that the connection between the ground floor entrance and the second floor living room will never be missed. 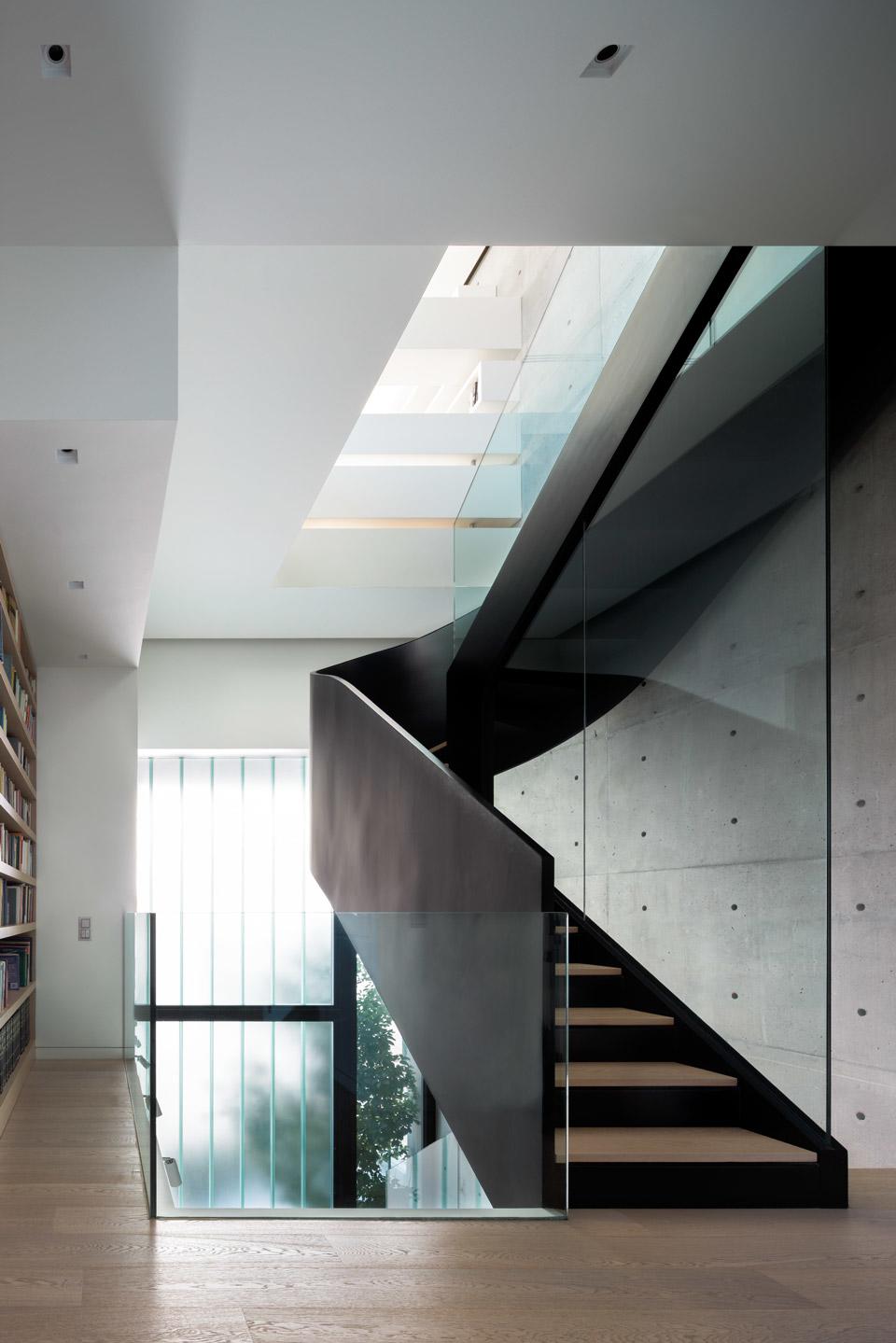 The living room area itself is rather simple in its layout, unified with the dining area and the semi – open plan kitchen. A 14m wide, floor to ceiling glass facade, permits the unification of the interior with the Phaestos stone finished pool deck outside, allowing full access to the breathtaking view and the rooftop pool from every spot in the living room and the kitchen. Abiding to the strict planning regulations, the deck has no pergolas or other permanent structures on it, its shading obtained by large retractable tents housed in the massive lintel above the glazed facade. 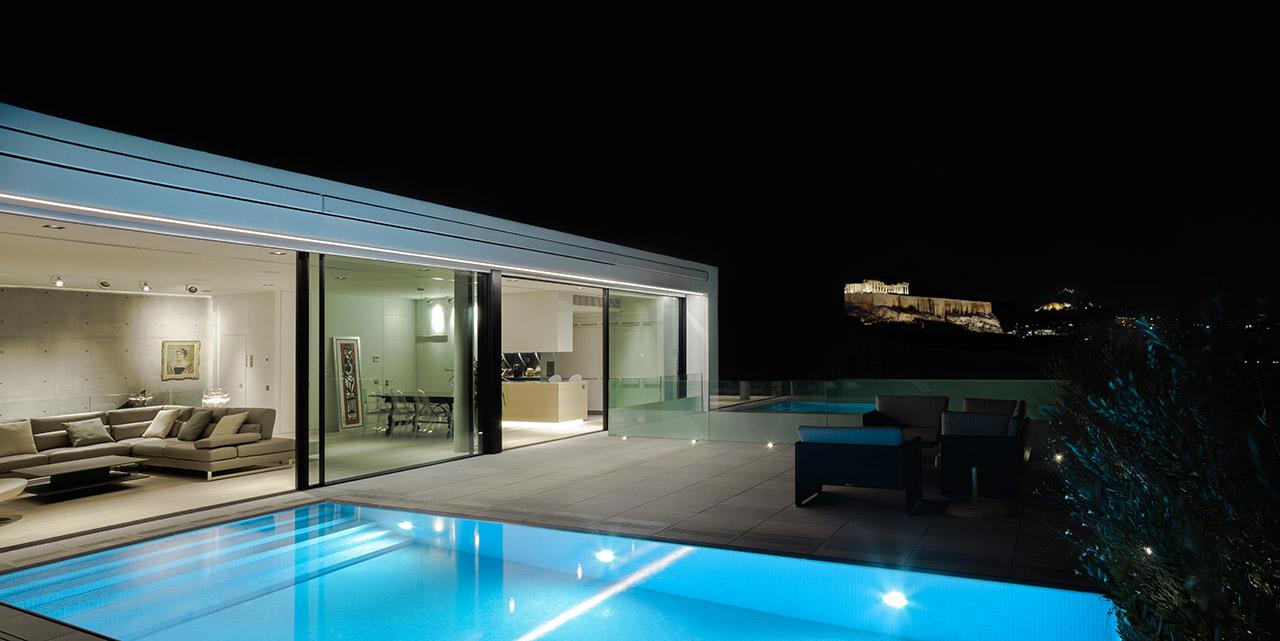 Underneath the living room level, the first floor contains the more private areas of the couple. Privacy towards the narrow street outside is ensured by a linear band of vertical, rotating cedar louvers, rectilinear in section, which filter activity, both inbound and outbound, while providing shade from the intense Greek sunlight. In the core of the plot, the master bedroom and the playroom both open directly to an internal, Japanese – inspired garden, transplanting a bit of nature and a sense of openness to the space. 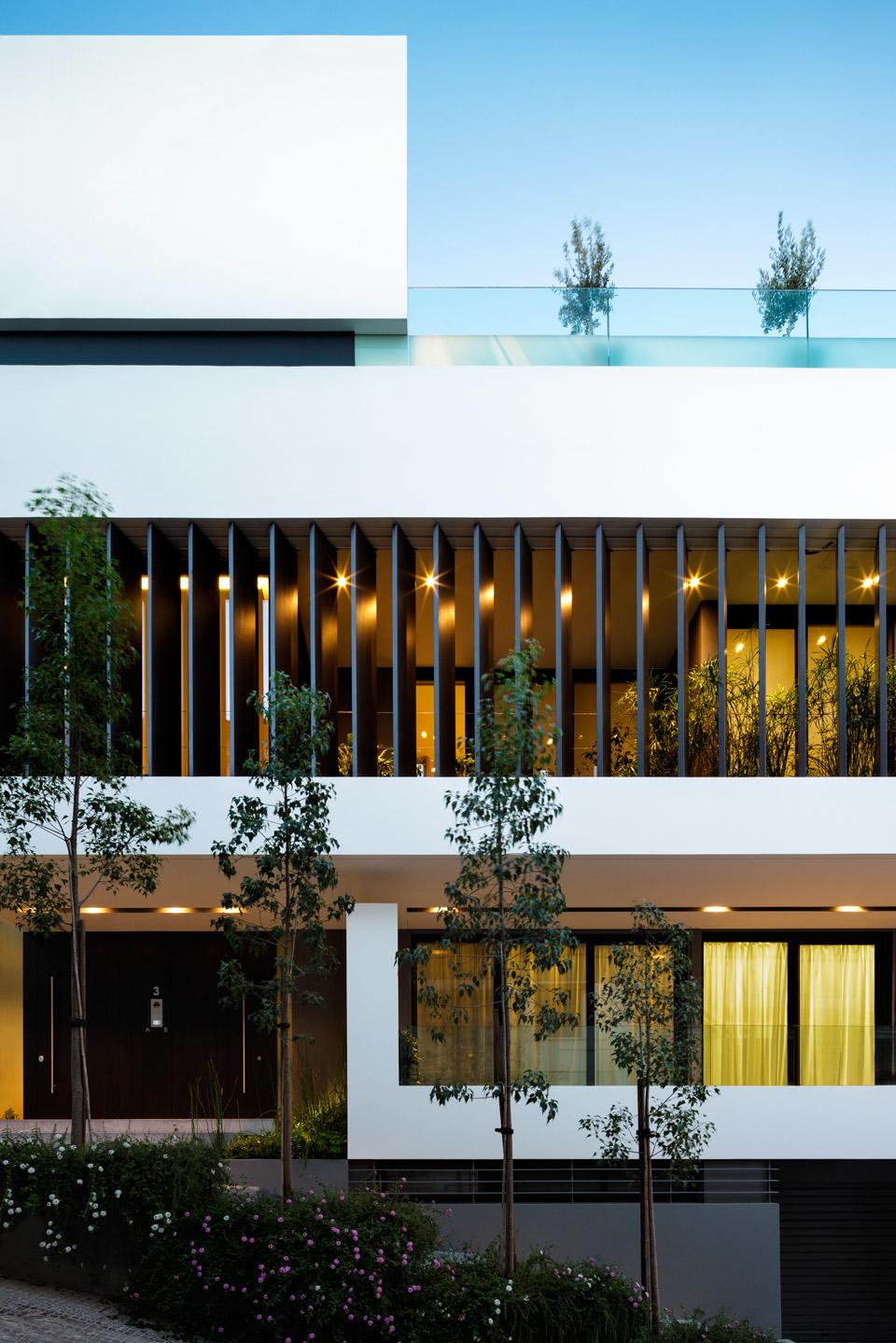 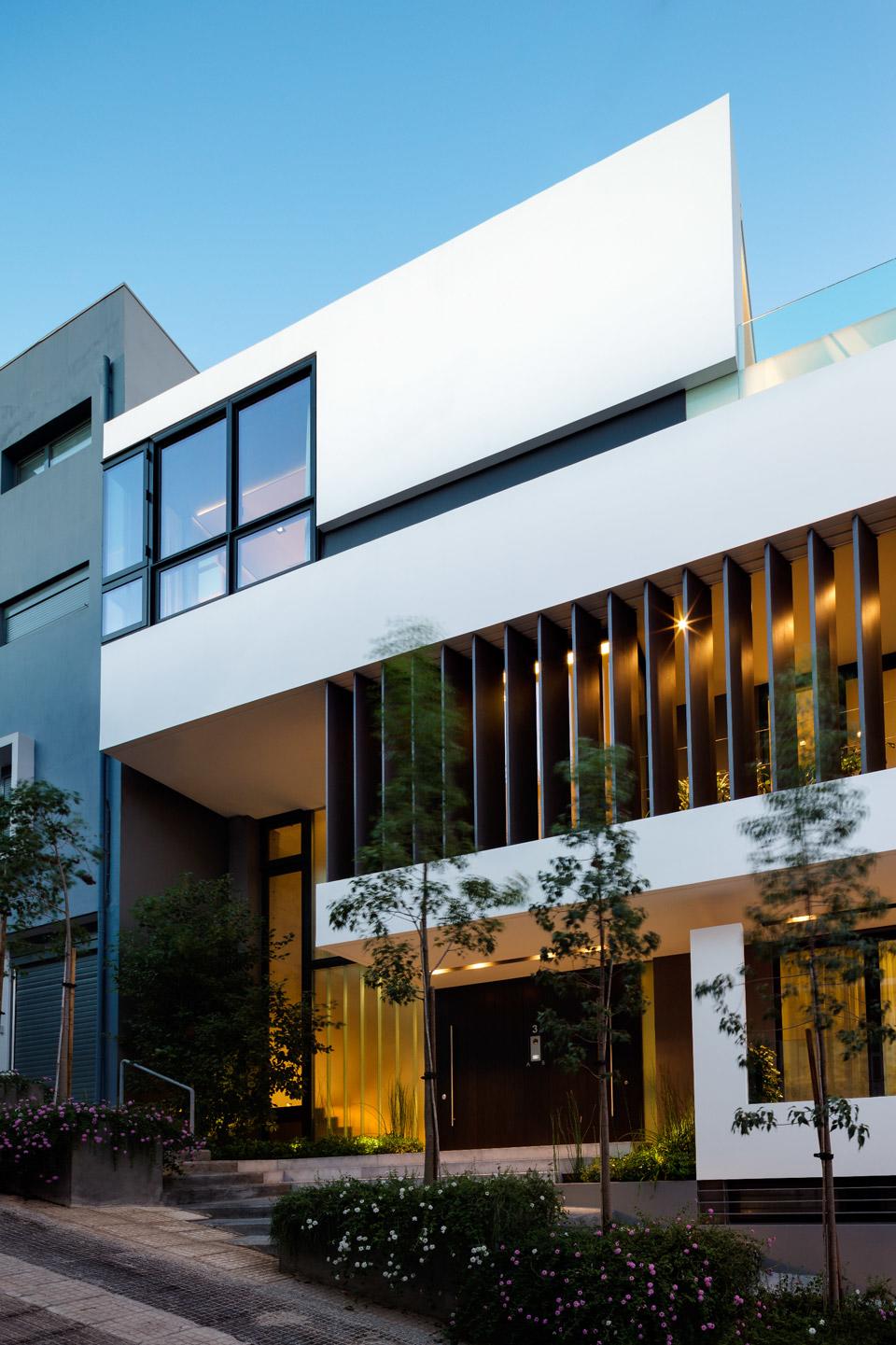 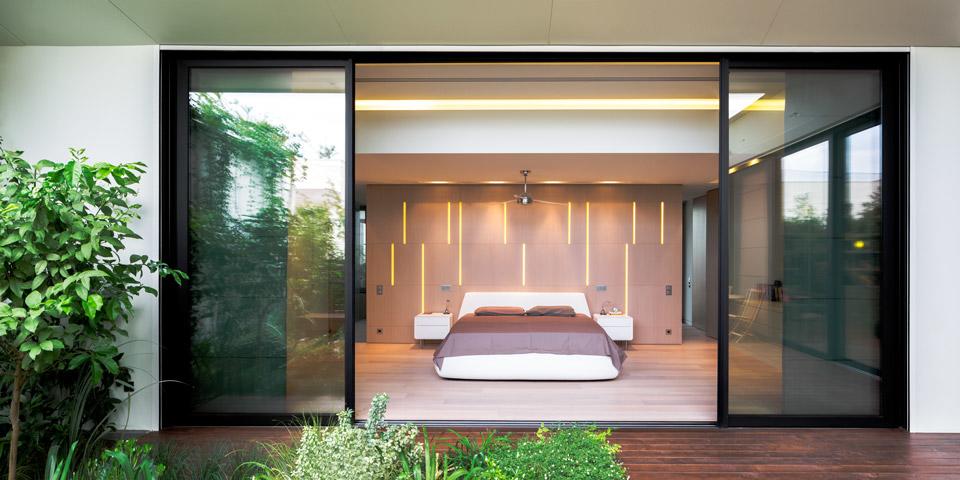 The interior of the house is not only about high ceilings, dramatic staircases and a continuous ascent towards the commanding views of the top floor. According to the owners’ predilections, every room has its own character, yet remains consistent to a tactile material palette on a par with the overall informal concept of the house. Off-white plaster, bleached oak surfaces, exposed concrete and black overtones resulted in a slightly desaturated palette, reflecting the natural light during the day and the carefully resolved artificial lighting at night. This restrained material swatch originates from an interior design approach that is willfully limited to a background role, acknowledging the fact that in the end of the day it is the owner’s life that will unfold in the house. Far from implying any architectural shortage, this design approach was proved in action, since the selection of furniture by the owners fitted in the interior without undermining the overall architectural values of the residence. 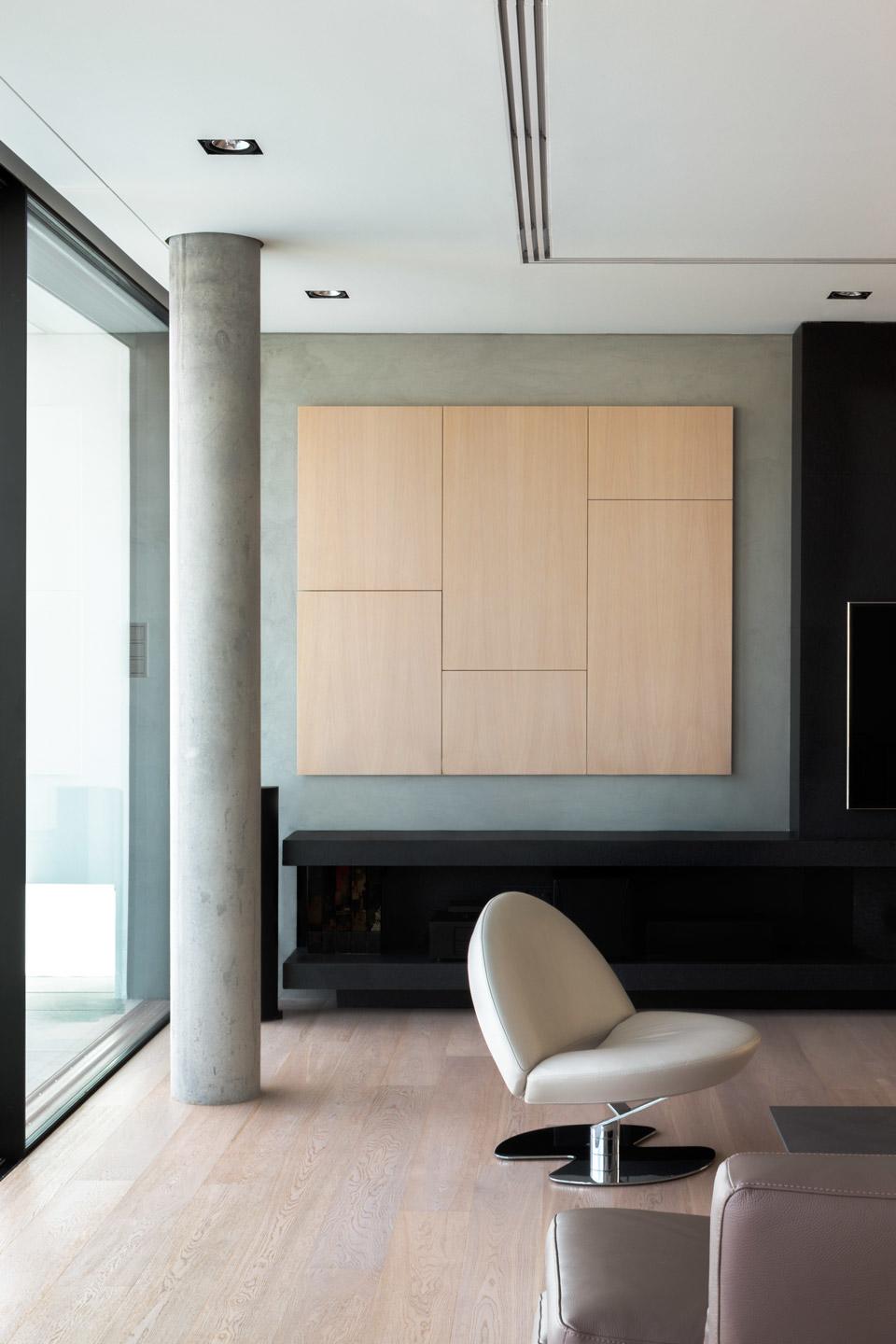 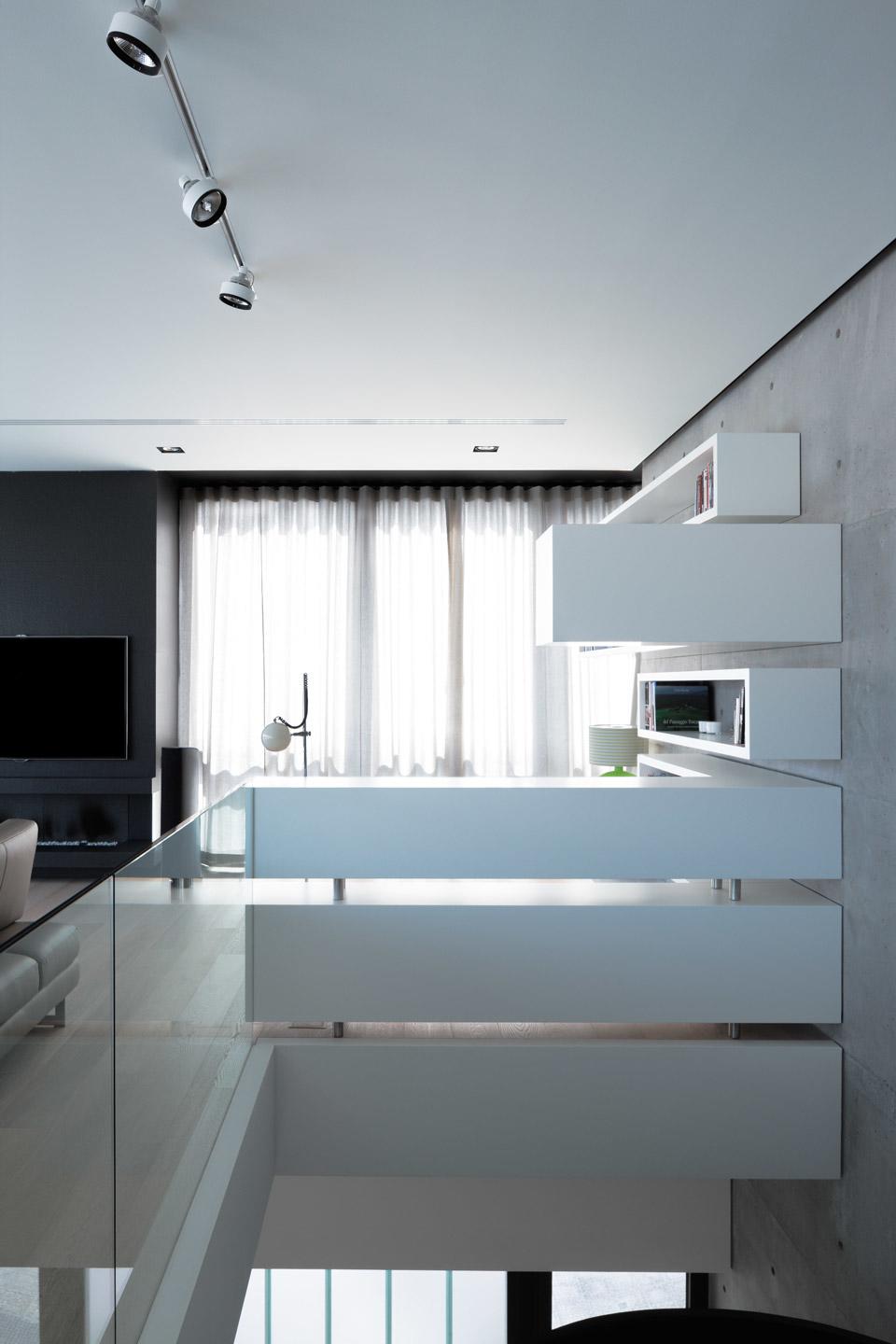 Epitomizing the overall concept, the facade of the residence is the actual communicator of its architecture. Despite the fact that it is a single elevation building, “House On Top” stands out and in the same time blends in the city, in a way that shows respect to the neighborhood and enhances its appeal. Considering Athens’ chaotic urban environment this was no easy feat to achieve. Quoting the owners themselves ” this is achieved through clear lines and a sense of lightness allowing the eye to rest within the jumble of different styles of the typical Athenian urban architecture”. The stacked linear volumes express the climax towards the view-mastering pool deck and reflect the internal spatial structuring, despite their partly closed facades towards the street. A double height external niche for the entrance is actually pulling the city inside, in a gesture that achieves the welcoming and informal spirit that the owners wanted. Moreover, this specific way of volume-stacking divides the building into smaller elements, each one with its own chiaroscuro areas, reducing its perceptible mass – the louvers band contributing a lot to that effect. 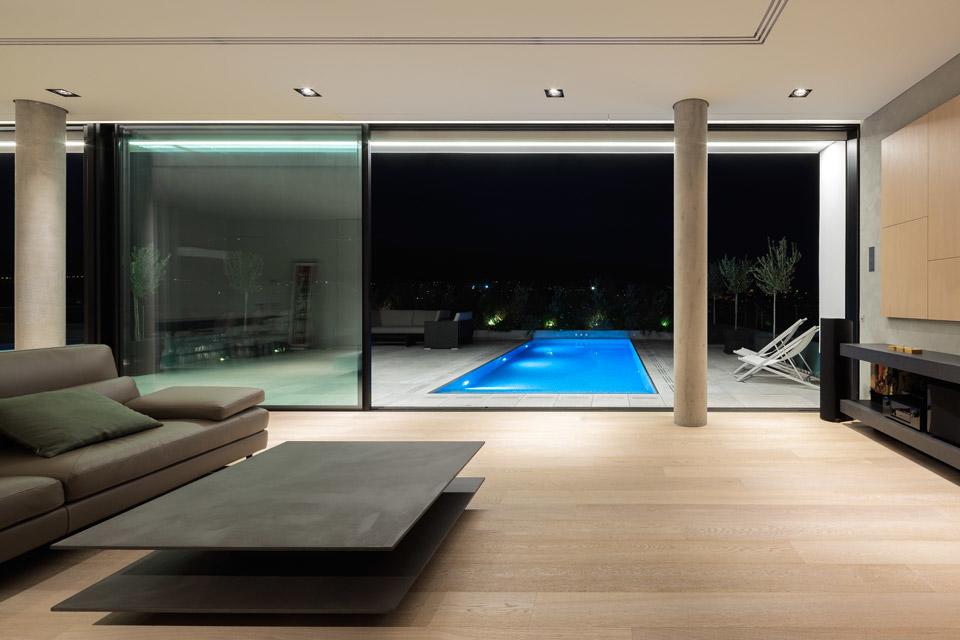 Casually exercising on that famous jogging trail nearby, the architects recall “House On Top” as a challenging marathon race, full of strenuous uphill sections and demanding descents. However it was team work from day one – as requested – and the trophies were precious for both the architects and the owners. ISV Architects lived up to the expectations of their clients, coming to terms with a difficult task – architecturally and structurally. Downsizing and applying their architectural style to such a constrained site was also a welcome bonus. Most important, the owners now have a place they can really call home – the way they wanted it, collectively achieved with their architects of choice. Given their self-confidence, consistency and forward thinking character, for ISV Architects this is a trophy to be proud of.