A House between the Rocks, Volax, Tinos – by Aristides Dallas

Volax is perhaps, the most “authentic” location in Tinos; blatantly special and distinct, in a way that makes it, unique in Cyclades – though it wouldn’t be an exaggeration to say in the world. So, it goes without saying that the design of a residence in Volax, is a challenge and why not, a “personal bet” for every architect. 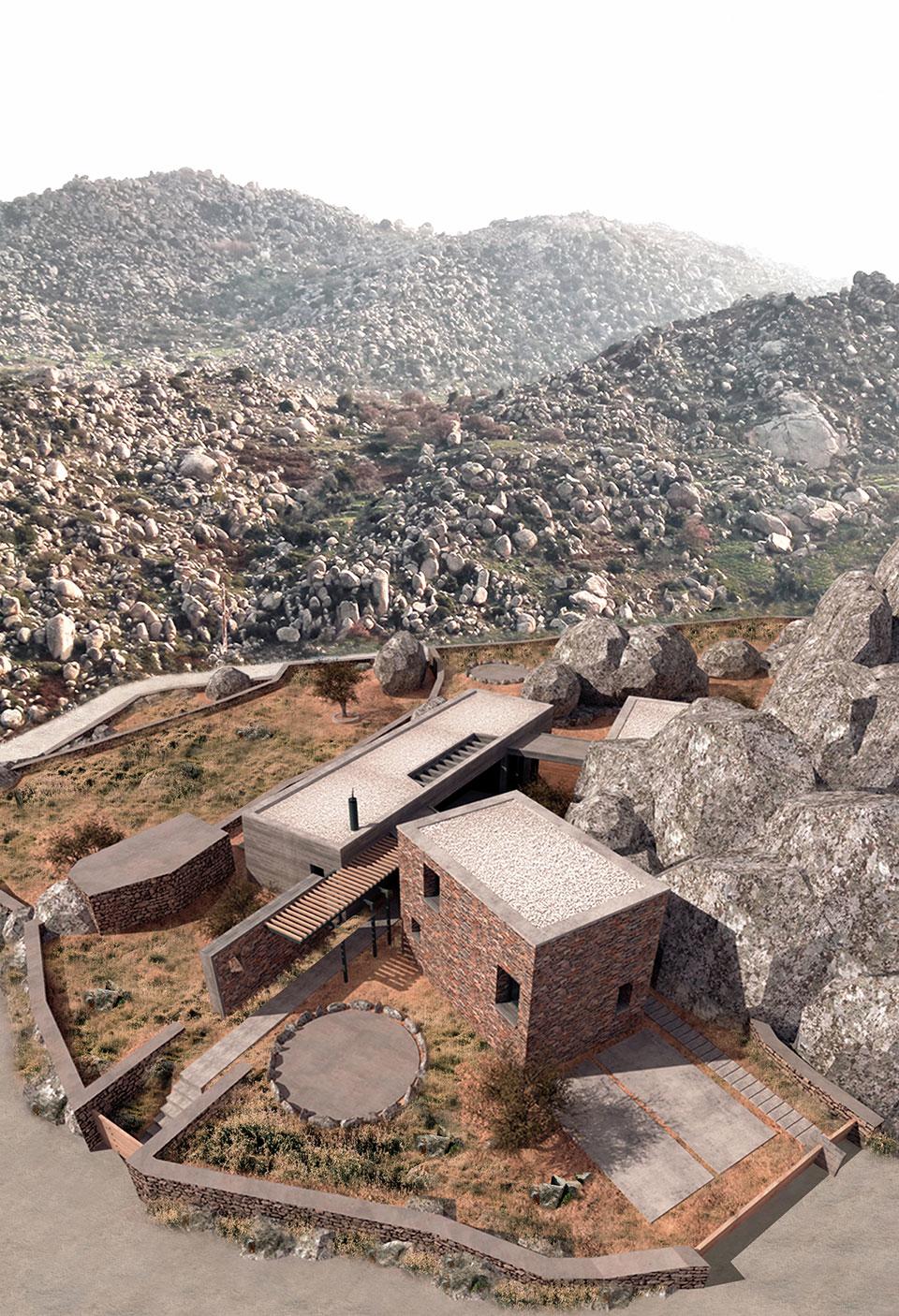 Aristides Dallas and his architecture practice responded affirmatively to this challenge. On behalf of a couple of rock climbers, he designed and at the time writing, is constructing, in cooperation with Dimitres Louvaris’ construction company, Aegean de.co.de., a residence which seems like forming a continuation or complementary part of the overall grand picture of Volax. Nature may have done wonders during the creation of the round rocks that remind of natural artworks, still the architect has added his personal, “human” touch so as to give shape to a residence as an integral part of the area. 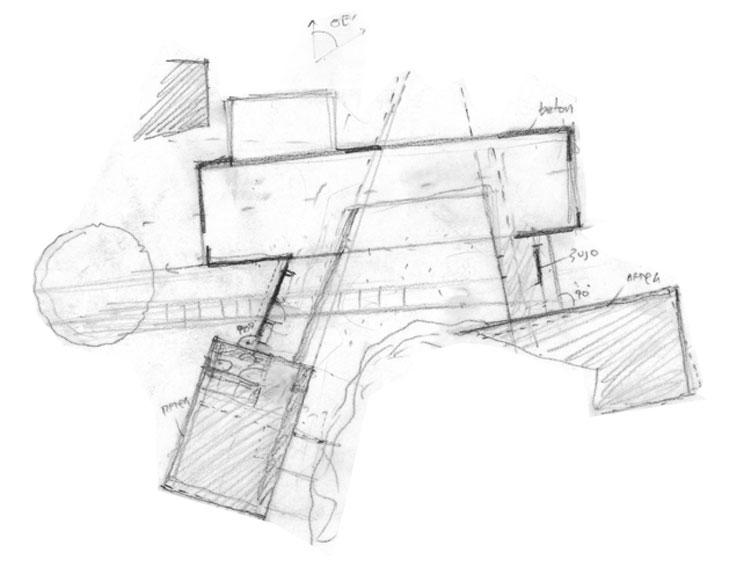 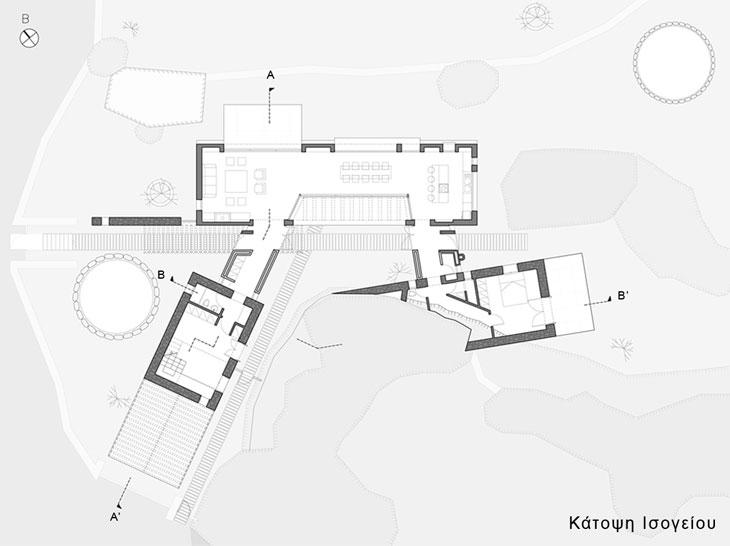 House between the Rocks, groundfloor plan 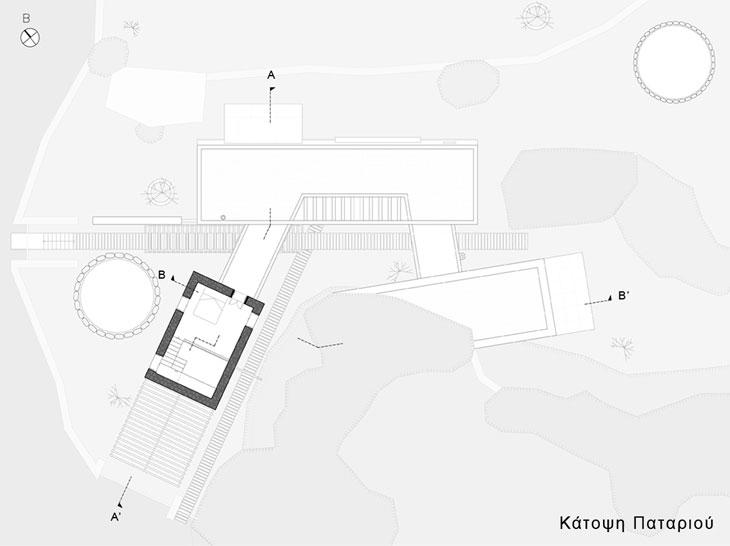 Strongly influenced by the words of the famous Greek architect, Aris Constantinides, that as not every plant grows in all places but specific ones (depending on climate, soil, etc), in the same way only specific buildings can stand out in specific locations, A. Dallas designs a residence in perfect harmony with the surrounding area. With the disintegration of the residence in distinct volumes that are set around the spherical rocks, he creates an overall sensation of uniformity. 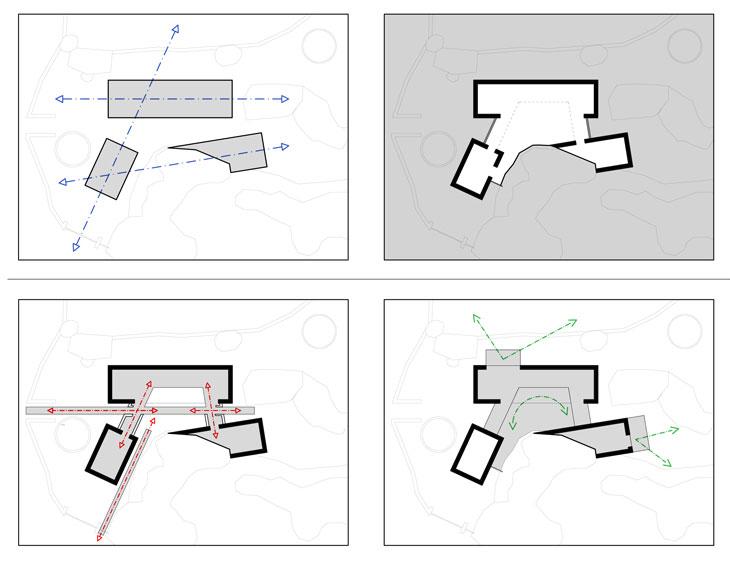 House between the Rocks, diagrams 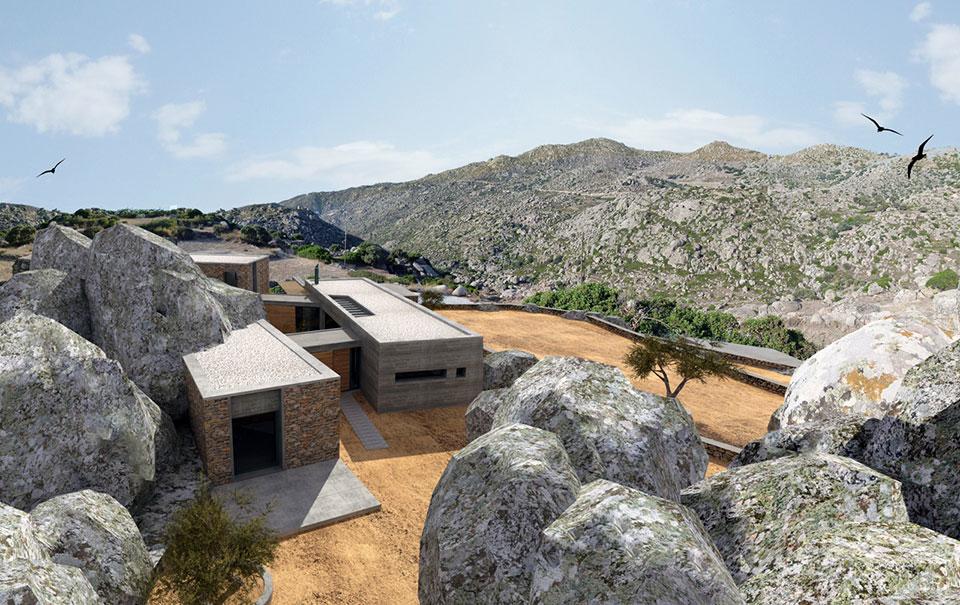 House between the Rocks, master bedroom

Around the central patio, the three buildings that house the main functions of the residence differ in height, dimensions, even in materials. Their principal feature is that no organized design – site concept was followed for their construction but instead, each part has been freely set in the space, in an almost anarchic way, as if it has fallen from the sky and it just stood there. In other words, as exactly it has happened to Volax volcanic spherical rocks. “Having been limited only by the orientation and the need to protect the existing “random” organization of the surrounding environment, our aim was to harmonize the residence with it’s environment, not only accordingly the new constructed space, but also the “in-between” space, as well as the relationship between them” the architect highlights. 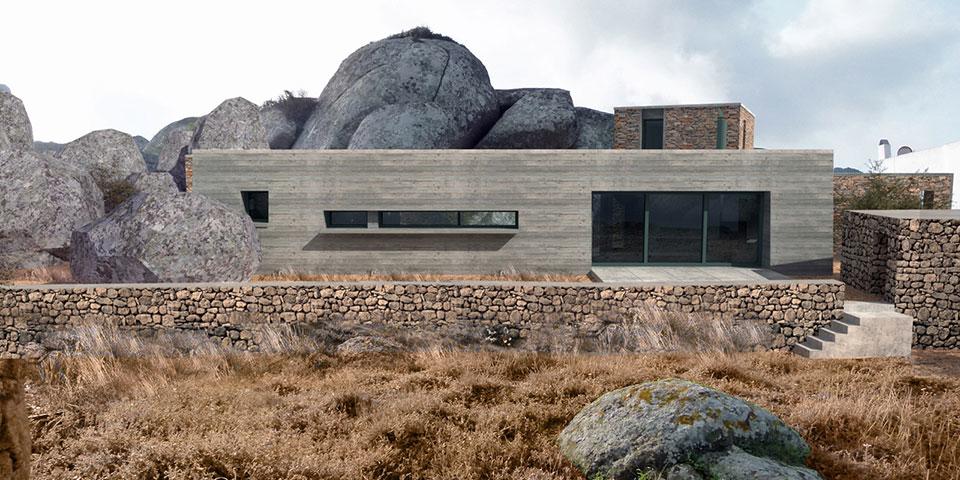 House between the Rocks, north facade 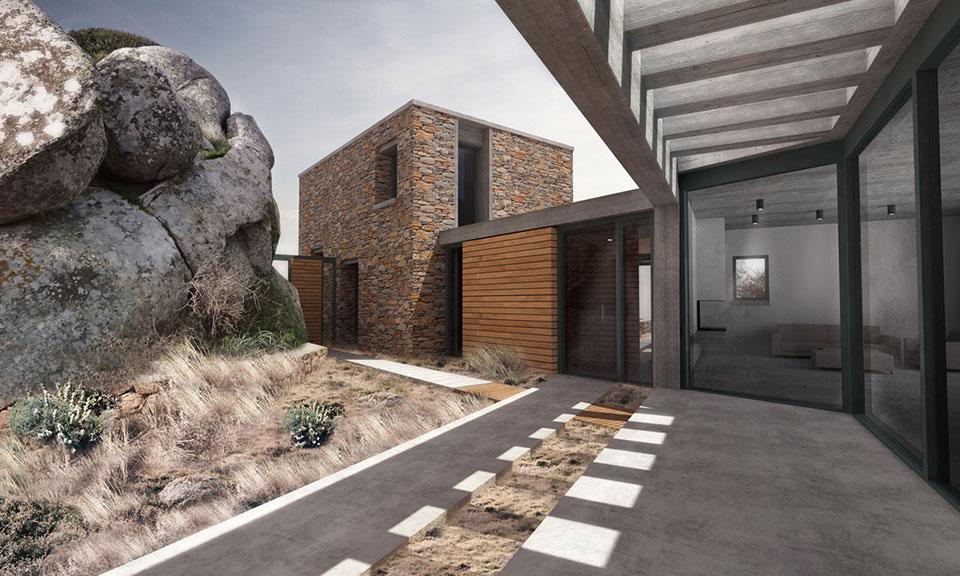 House between the Rocks, courtyard

Equally typical is the northern side of the residence where A. Dallas creates a “limit”, an artificial protection of the space from the Northern Wind. He places there a volume of apparent and non-painted concrete. The selection of this materiality makes the house seem also like a rock while in time, when the colourful concrete aggregates emerge to the surface, it will be totally integrated with the landscape. On the other hand, the selection of its shape, an oblong rectangle, manages to give prominence to the rocks “underlying” them and enhancing their sphericity, setting them in direct “confrontation” with its own linearity. 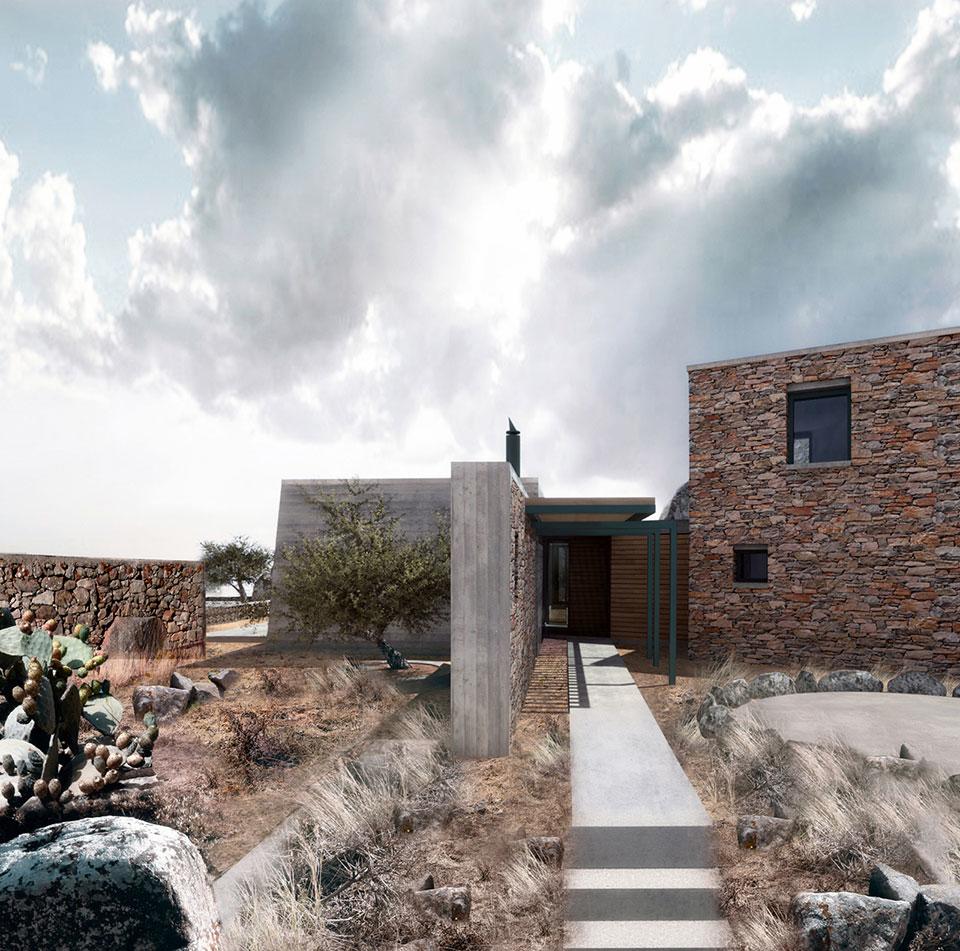 House between the Rocks, entrance 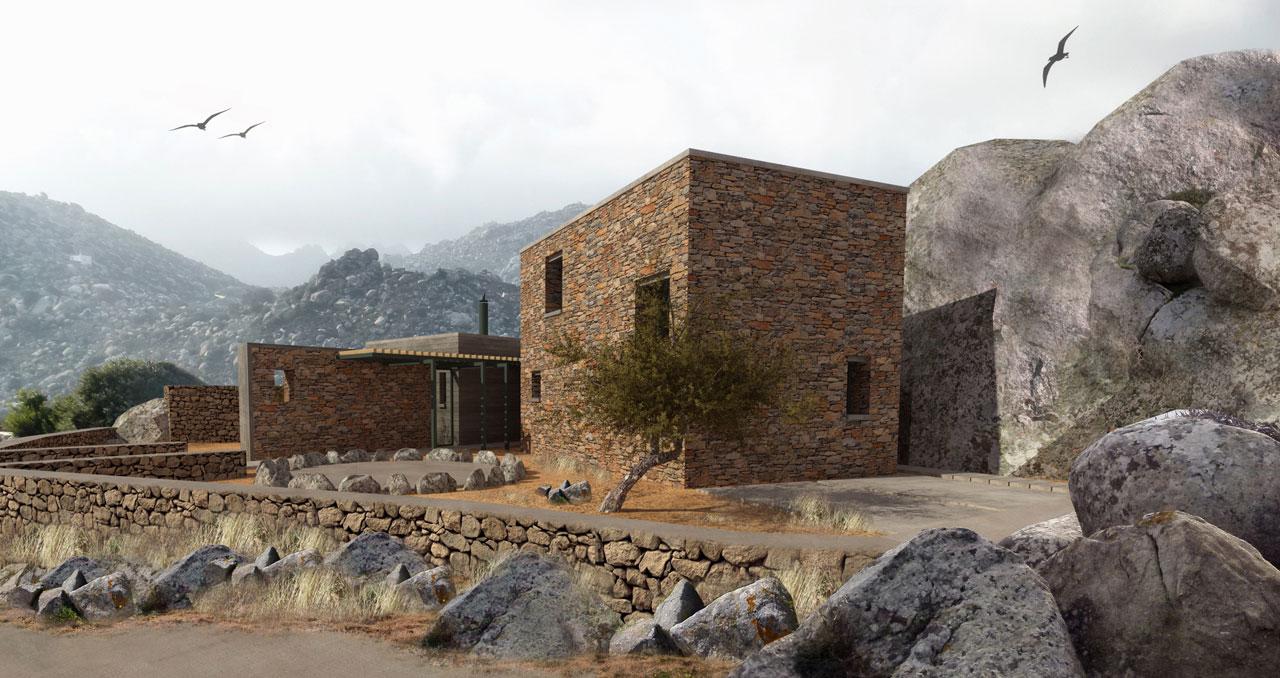 House between the Rocks, view from the village

In the internal part, the hard envelope “breaks” and becomes “transparent”, allowing the interior to become one with the exterior part. In this way, the limitations of the “inside” and the “outside” become less and less apparent, while the interior space extend until the rock cluster, in the back of the land towards the village.

Aristides Dallas is an architect based in Tinos Island, where he moved his 2008 established practice from Athens. His project A House between the Rocks in Volax, Tinos, has been selected to be showcased at the 8th Young Architects Biennial to take place in Athens in September, proudly supported by SIAS SA.

The Return of Place: a square grounded in Nordic sensibility by AAIKO ARKITEKTER
THE NETHERLANDS EMBASSY IN ATHENS by GFRA ARCHITECTS
©2009 - 2022 SIAS SA. ALL RIGHTS RESERVED.