New View is a lightweight temporary structure that maximizes spatial performance while minimizing material and structure. It was realized at the rooftop of Romantso Cultural Center in Athens Greece during May 2014, and was funded by the IKEA Foundation, Switzerland. The pavilion was designed in order to energize the abandoned terrace of the building and to become a summer gathering place for the people working at the creative offices hosted beneath. “New View” pavilion is an approach towards a viable way of efficiently realizing similar temporary structures at points of significant natural/cultural beauty (vista points), while representing a fresh take on the very elementary notion of architecture as a shelter. 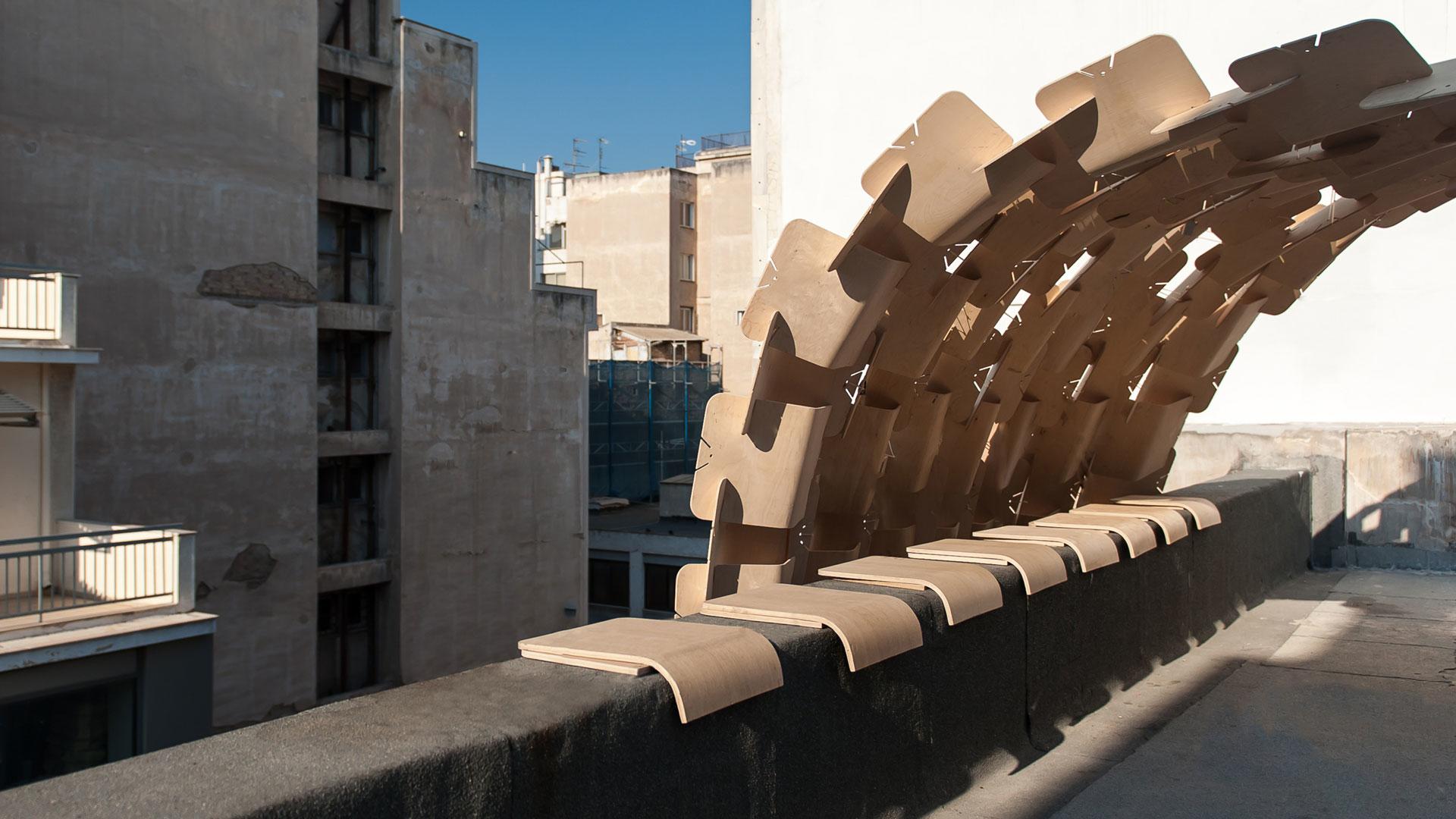 The project is the outcome of research in the development of multi-objective generative design systems that incorporate bottom up approaches along with parametric techniques in order to inform architectural design. In particular the workflow is a combination of structural form finding with a vernacular building technique (reciprocal frames), and an agent based design system (permeability) through a continuous digital chain (digital fabrication). Based on the available resources (budget, material, workforce) the design system was quickly adapted and optimized in order to realize the pavilion in 1:1 scale within the given timeframe (3 weeks). 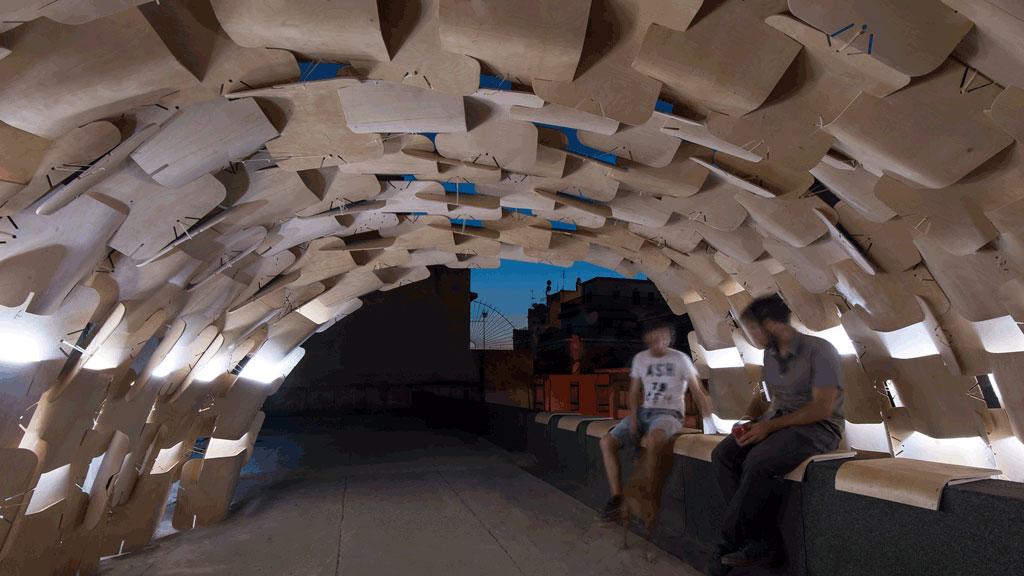 The objective of this project formed itself into the development and evaluation of the proposed workflow, which is informed by environmental and structural analysis, as well as material and construction constraints in order to increase performance objectives while enabling geometric complexity. The emphasis of the research at this stage is to elaborately study traditional techniques, material properties and assembly methods and explore how they can translate into design behaviors and simulations that enable emergent patterns to influence and improve the performance and energy footprint of the designed space. 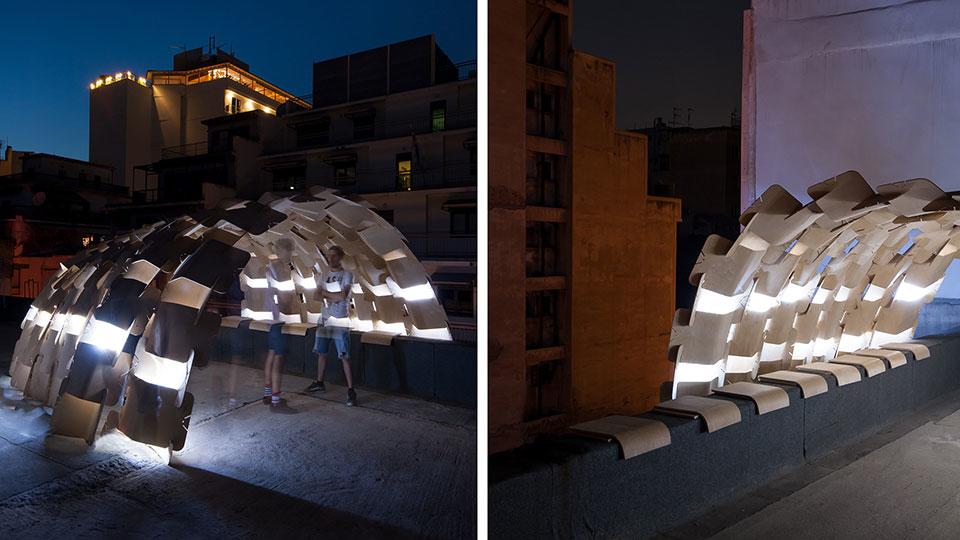 The pavilion presents results of the form finding, generative patterning, digital fabrication affordances and sets, and acts as an agenda for next steps in the use of multi-agent systems and parametric design systems for design purposes. 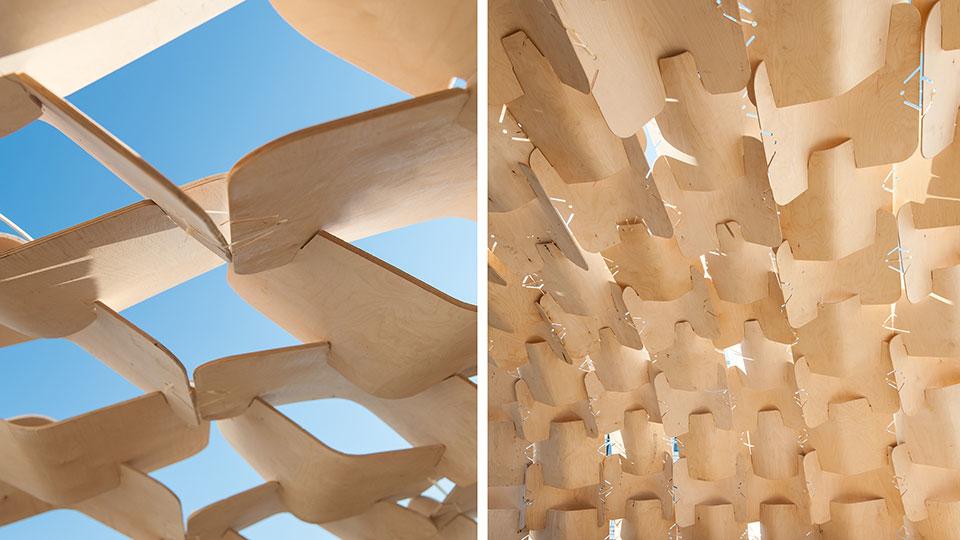 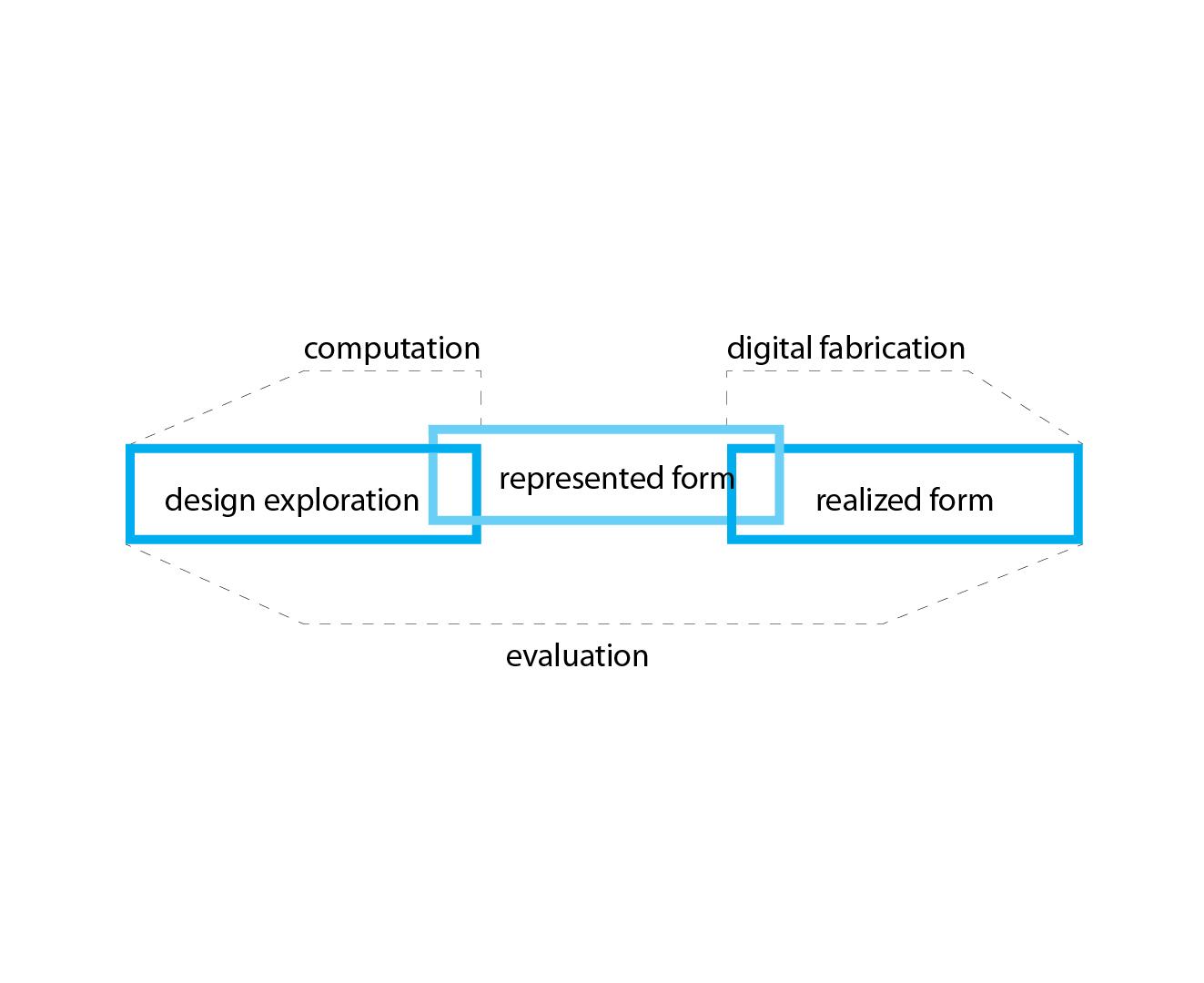 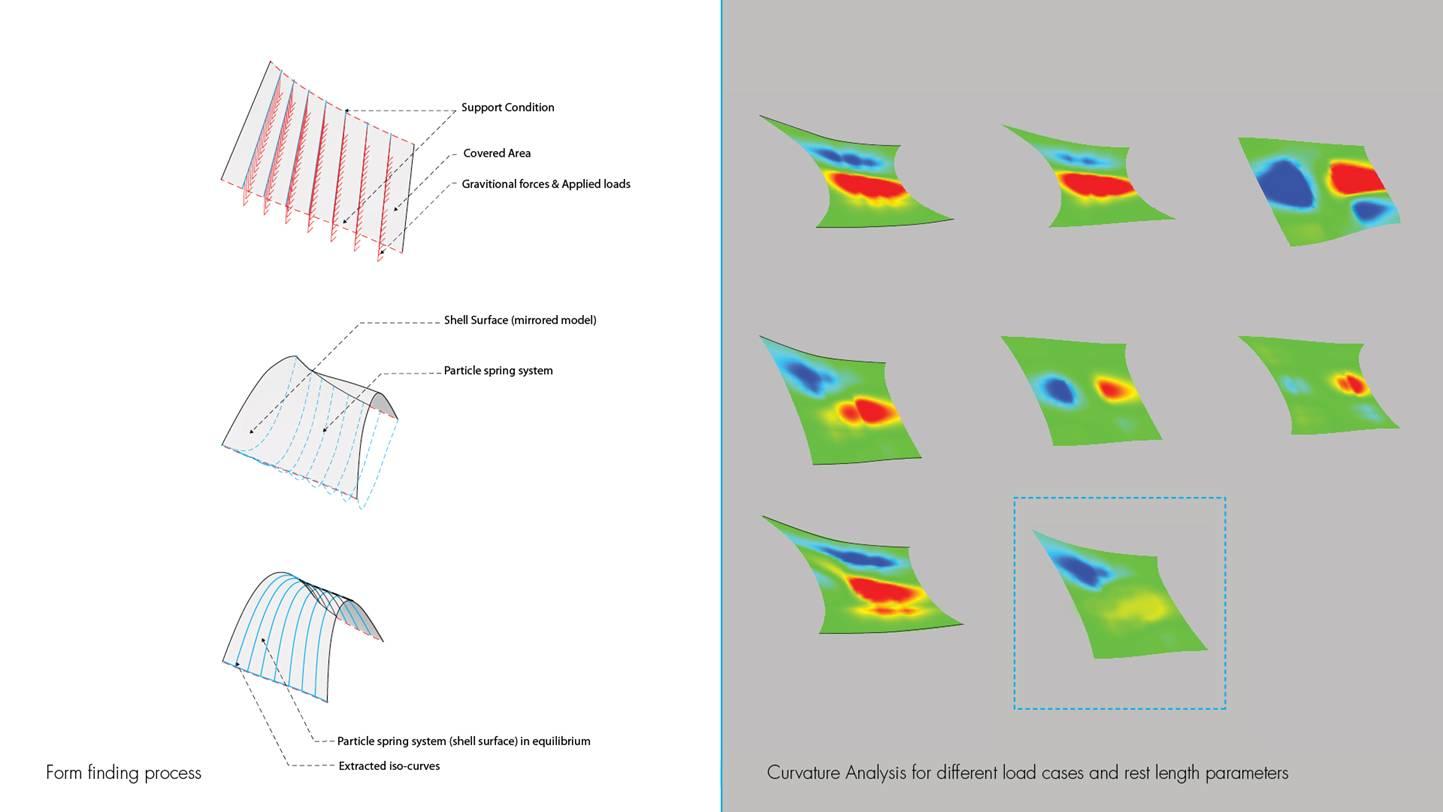 The design to production process was broken into three processes that were enabled by advanced computational design techniques:

Form finding
The form of the shell emerged out of multiple digital form-finding simulations based on the hanging chain techniques develop by pioneers like Frei Otto, Heinz Isler and Antonio Gaudi among others. Using a visual scripting editor (grasshopper) the physics engine Kangaroo and the a tool for environmental analysis (Ladybug/Honeybee) the form self –organizes into the catenary-like thrust surfaces that are aligned with the structural vector and allow for minimal surface depths while simultaneously being analyzed for solar radiation. 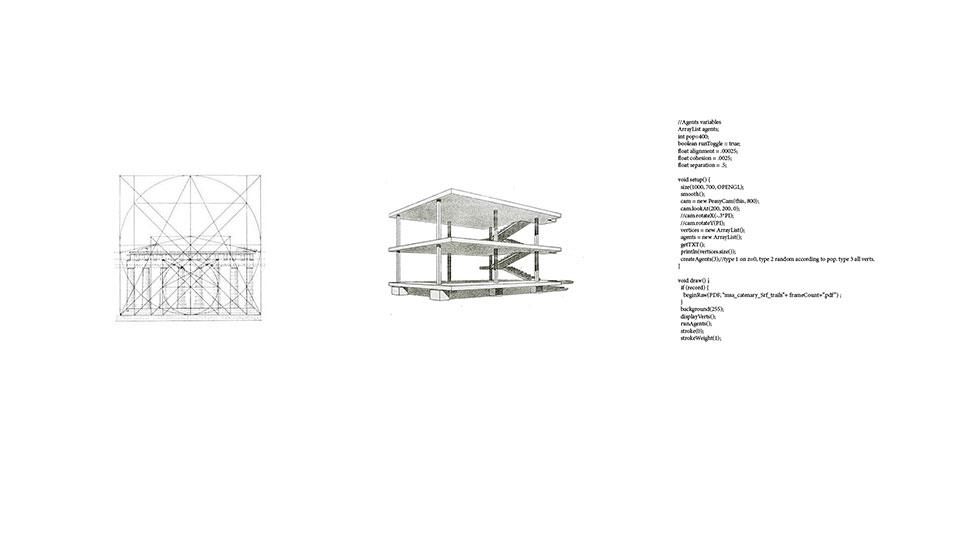 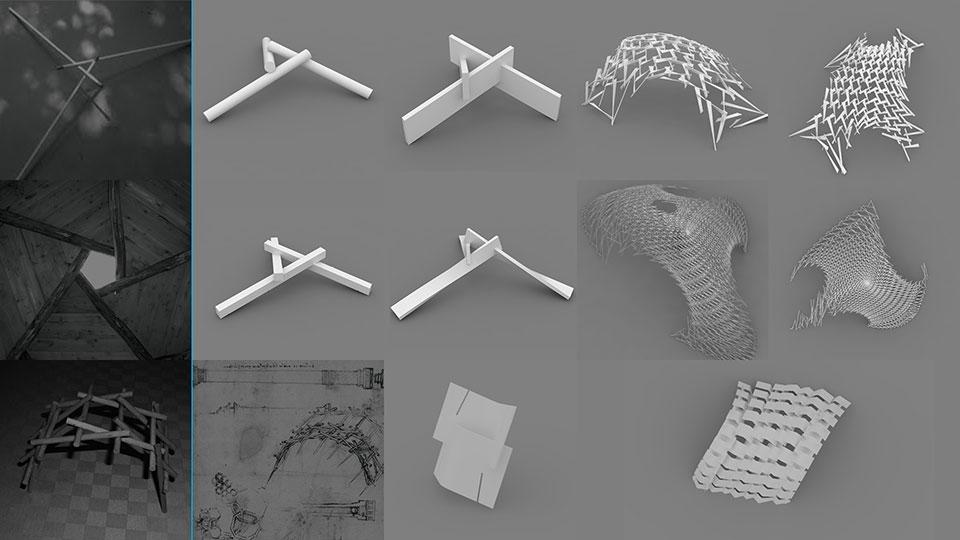 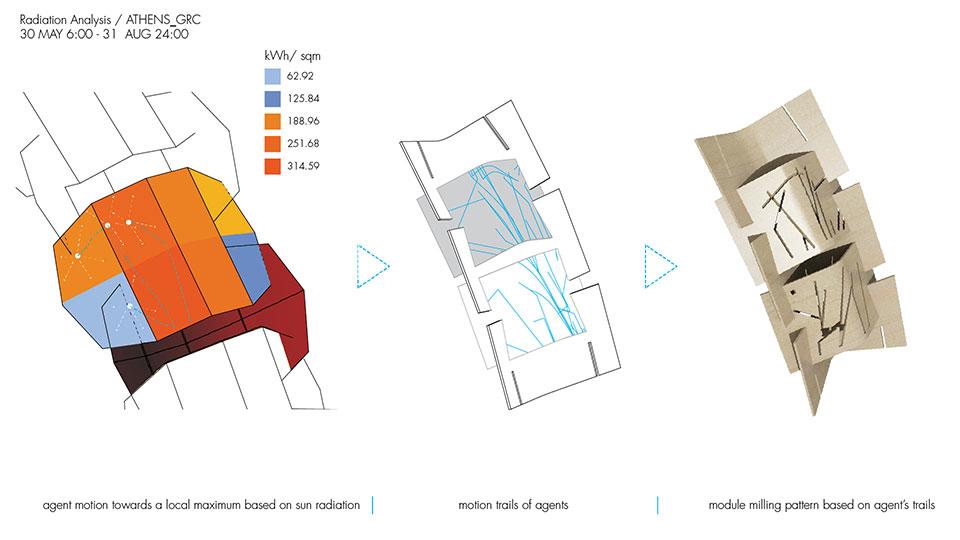 Structural System-Reciprocal frames
A traditional building technique, that of reciprocal frames, which can be found in buildings across the world was implemented for informing the generated surface. Basic building components were designed and the relationship of part to whole was studied in order to observe the behavior of the structure. 150 unique curved plywood panels as thin as 1.1cm were custom produced and thermoformed using birch plywood and an innovative glueing technique (UPM grada). Simple notches, provided friction based joinery that proved reliable and easy for assembly. An agent based method, which was developed in java was implemented for the perforation. The perforation was informed by the radiation analysis but was only realized in parts due to budget limitations. A total of 54 cm of wood were used to cover an area of approximately 25sqm 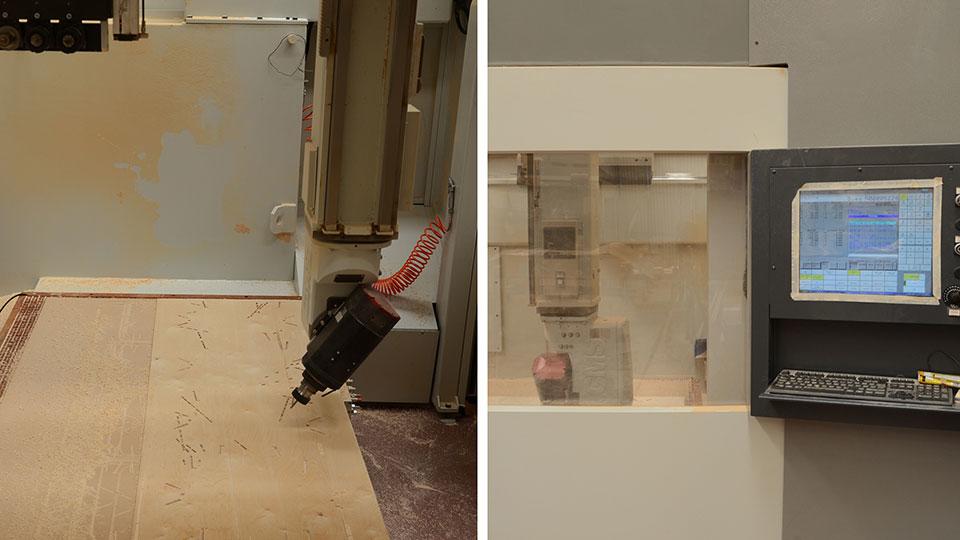 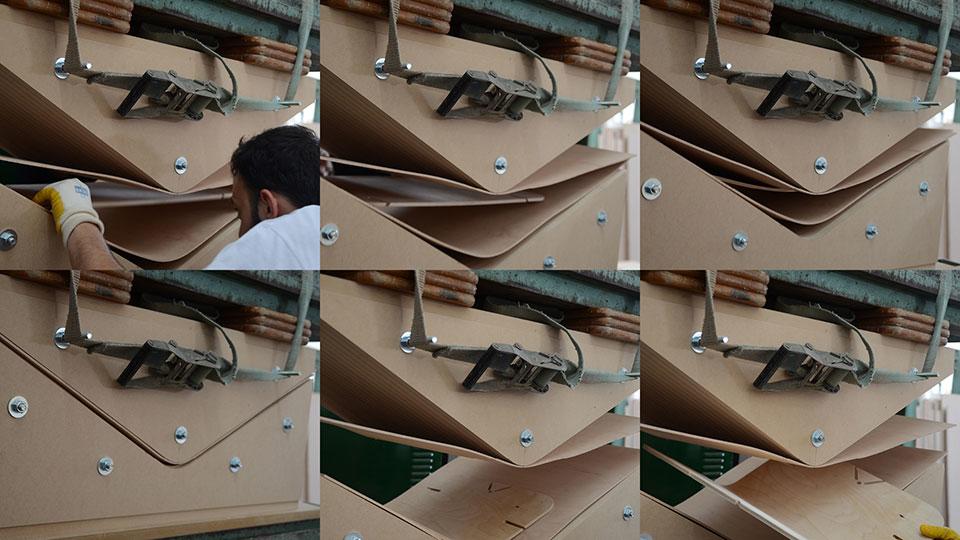 Fabrication Planning
Using custom developed scripts each panel was unfolded and prepared for fabrication. The sizing of the panels was appropriated so that it fits 5 panel types to ensure optimal material usage. The cell’s perforation pattern, notches and labels were automatically generated along with build up assembly instructions, which were produced to aid non expert workers in the assembly. The panels were custom produced and milled using a 6-axis CNC machine and were thermoformed after being processed. 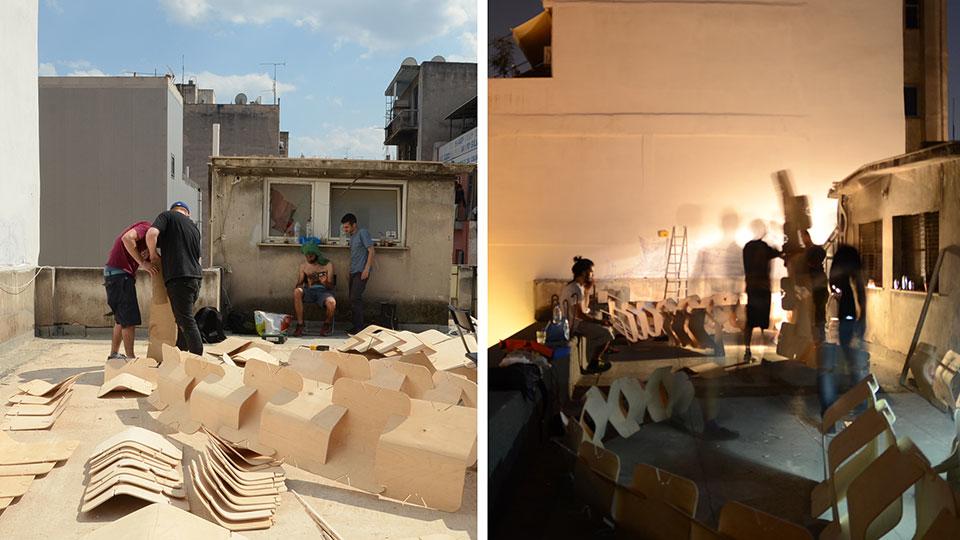 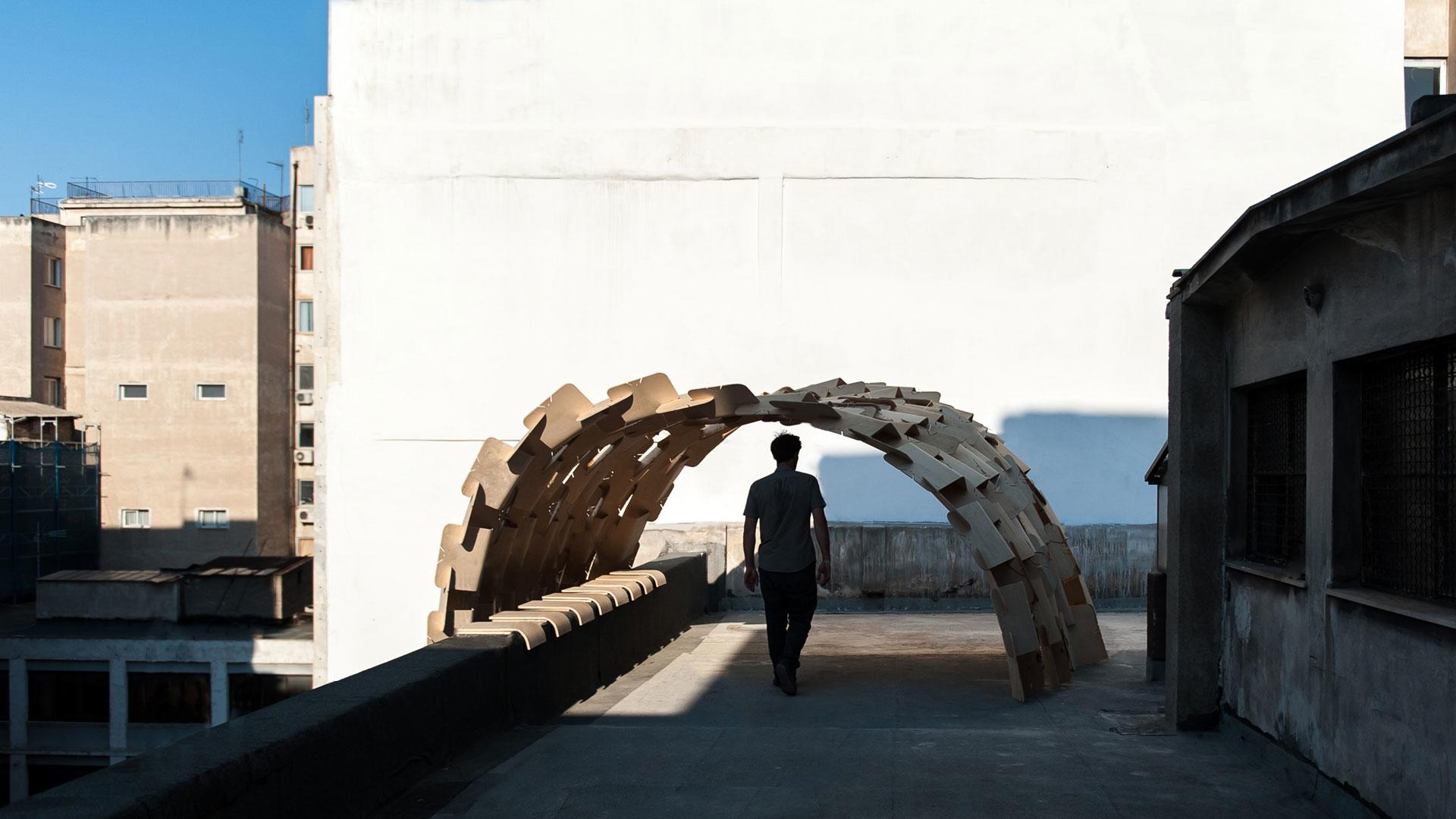 Evangelos and Iasonas Pantazis founded Topotheque design office in New York in 2006. Their practice engages a broad spectrum of activities with a main focus on design in its various expressions, including Architecture and Industrial design as well as graphic and plastic arts. Their project New View has been selected to be showcased at the 8th Young Architects Biennial to take place in Athens in September, proudly supported by SIAS SA.